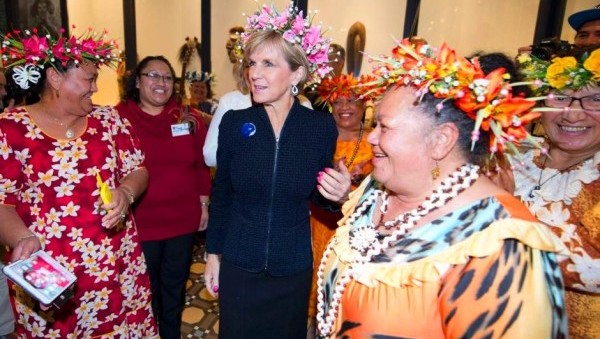 Foreign Minister Julie Bishop has opened a preview one of the world’s biggest collections of Pacific artwork at an event in Sydney.

At least 200 artefacts from 16 Pacific nations and territories are on display at the Australian Museum‘s Pacific Spirit exhibition, which opened today.

When the organisers of the exhibition approached Ms Bishop about the idea, she jumped at the chance to support the gallery, as part of a wider campaign of cultural outreach within Australia and across the Pacific.

“I was immediately captivated by the opportunities to build bridges between the Pacific islands and Australia and the Pacific Islander communities in Australia, through this display of significant artefacts,” she told Pacific Beat.

Dion Pieta, the museum’s coordinator for Pacific and international collections, said the exhibition was a testament to the diversity of Pacific culture.

“I think there’s something for everyone in the collections. There’s beautiful artistry … there are objects that would stir the imagination,” he said.

The collection boasts 23 sacred masks from Papua New Guinea which date back to the 1800s.

Museum director Kim McKay said she has much bigger plans for promoting Pacific artwork and culture.

“I think the museums of the future aren’t just places where you look at objects, but where you do experience culture,” she said.

“So we want to see a lot more of the Pacific community in the museum, performing, singing, sharing their culture with the wider public.

“We have a lot of knowledge at the museum here, and skills, so we want to share that with Pacific communities, so we’ve got a program in place where we want to do exchanges with museums.”

She said her plan is to develop two permanent galleries – one for Melanesia and one for Polynesia – and spend half of her budget on outreach.

The Foreign Minister said her many travels in the Pacific showed her cultural diplomacy is just as important as sports diplomacy.

She said the Government’s Colombo plan – now in its second year – is another signature policy aimed at fostering ties.

“This year 280 young Australian undergraduates from universities across Australia will be living and studying and working in communities in the Pacific,” she said.