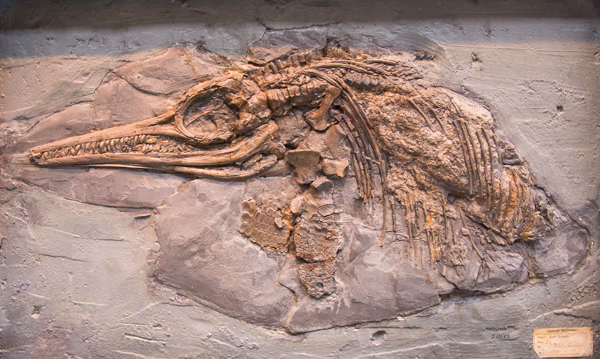 Mark Carnall, How to visit lost worlds: our pick of the UK’s palaeontology museums, The Guardian, 6 October 2016

The UK has a rich palaeontological heritage – here are just some of the museums and collections worth visiting.

This summer, I have spent a lot of time thinking about popularising palaeontology.

On the 16th of September, palaeontological museum curators, researchers, students, authors and performers packed up some of their fossil collections (and even a whole restaurant inside an Iguanodon) and descended upon Scarborough’s Rotunda Museum for the Yorkshire Fossil Festival. The three-day festival was a chance for the public to get up close to fossils and for palaeontologists to enthuse, inspire and engage about evolution, extinction, anatomy and taxonomy. In the evenings it was a rare chance for palaeontologists from across the country to catch up, share news and there was a fair bit of geeking out.

Two days before the Yorkshire Fossil Festival was the Popularising Palaeontology workshop at King’s College London. This was a more formal meeting of curators, researchers, palaeo artists, authors, historians and journalists, who met to discuss the past, present and future of popularising palaeontology.

As a museum professional, my interest lies in how we popularise palaeontology in museum spaces. Museums and their physical specimens still remain one of the prime gateways into communicating palaeontology to a broader audience. Talking to fellow palaeontologists, educators and members of the public, there are a number of threshold challenges in the public understanding of palaeontology that are enduring.

One of the biggest problems is the dominating dinosaurs. Many museum visitors, young and old, assume that palaeontology is just dinosaurs. Every articulated skeleton in a museum must be a dinosaur and every museum must have a dinosaur. So pervasive is this idea, that natural history museum educators spend a lot of their time, telling visitors what isn’t a dinosaur. Can you blame visitors for thinking every skeleton or fossil skeleton must be a dinosaur, however, when so many museum displays, touring exhibitions, popular palaeontological books, images in this article and museum shop merchandise focus on little else?

Another challenge is the idea that palaeontology, or at least interesting palaeontology, is something that we don’t have in the UK. This does seem to vary regionally. At the Yorkshire Fossil Festival, people of all ages could recognise an ammonite and many had collected these fossils locally, even if they didn’t know that ammonites were the shells of extinct cephalopod molluscs. In other parts of the country where fossil sites are a less obvious part of the local landscape, people are nearly always surprised to learn that mammoths, plesiosaurs, hippos and yes, even dinosaurs were stomping (and swimming around) in their neighbourhood millions of years ago.

This is where the amazing range of the UK’s palaeontological museums come in and not just the larger better known ones. Museums up and down the country are filled with local, national and international fossil collections but many of them are not widely known about.