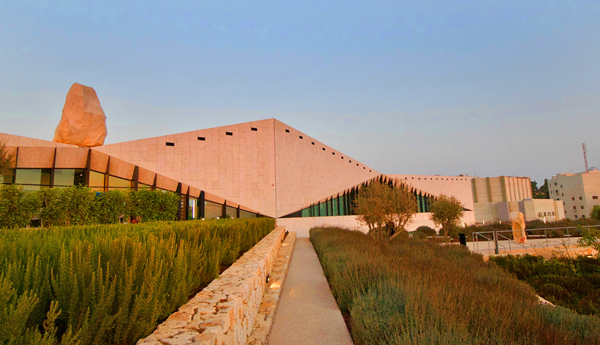 The Palestinian Museum with an unfinished work by Yazan Khalili atop the museum (all photos by the author for Hyperallergic unless otherwise noted).

Hrag Vartanian, A Garden of Possibilities at the Palestinian Museum, Hyperallergic, 6 September 2017

The new museum explores the living culture of Jerusalem, which curator Reem Fadda sees as a city that exemplifies the beginning and end of globalism.

BIRZEIT, Palestinian Territories — The fact that the Palestinian Museum even exists may surprise some people, not because of the wealth of talent that clearly exists in these lands, but because it suggests a type of normalcy to life in an area that continues to be under occupation. When the project was first announced there were conversations about creating a museum that would reflect the reality of Palestinian life, recognizing that not all Palestinians would be able to even visit it because of Israeli border restrictions against people of Palestinian origin. Then the roughly $30-million transnational museum opened without a major “exhibition,” or at least the type of exhibition we typically envision in art museums. It was a more low-key affair, focusing on objects we often associate with historical displays, but that was also because of the real problems of occupation.

“Until Israel recognize[s] most of the Unesco protocols which protect imported goods in the museum world,” Museum Chairperson Omar Al Qattan told The National, “we can’t really bring anything in except under consular or ambassadorial cover, which means it’s always going to be a problem borrowing or exchanging exhibition objects.”

That challenge is important, because a museum today is still often categorized by its landmark treasures, the works that attract crowds. It’s a reality that has inspired artists to think creatively, and one Palestinian artist, Khaled Hourani, highlighted it best in his incredible Picasso in Palestine project back in 2011. That year, Hourani was finally able to bring a Picasso to Palestine. We may take Picasso’s work for granted in Western capitals, but in places under occupation there is real power in the presence of such “masterpiece” objects since shuttling treasures across borders reveals who is actually in control — the fact is that the Palestinian Authority has very limited authority over its own boundaries.

Speaking to Leah Sandals at Canadian Art magazine, Hourani outlined the serious issues he faced when he brought a Picasso painting to Ramallah, the capital of the Palestinian Authority. “How do you bring an artwork into a war zone? Normally this kind of artwork is supposed to go between two states that have clear borders, and it might normally take five months for that, from a museum to a museum,” Hourani explained.  “In our situation, you couldn’t guarantee the safety of the artwork. So that was also an obstacle. It was not possible to insure the work 100%. And it took two years, rather than five months, to get the artwork from Eindhoven to Ramallah.” The institution making the loan, the Van Abbemuseum, had to sign off on many of the strict insurance issues.

But the lack of an “exhibition” when the museum opened became a feature of themainstream media coverage of the institution. That absence, which can be interpreted many ways, was ridiculed by at least one Israeli news source that used the artless halls to hammer home a right-wing talking point: “As such, there is no distinct ‘Palestinian’ history or culture. And, so, it was absolutely fitting that The Palestinian Museum of Art, History and Culture opened its doors with NO EXHIBITS” (emphasis theirs). But on the Israeli left, or what remains of it, newspapers like Haaretz avoided that kind of extremist rhetoric to applaud the reality of this achievement — even pointing out that when Berlin’s Jewish Museum opened in 1999, it did not have a collection.

Yet this Museum is not hindered by its reality and it has decided to source many of its materials and talent from outside Israel, which is clearly a political and conceptual statement. That means the architects (Heneghan Peng) are Dublin-based, the landscape architect (Lara Zureikat) is Jordanian, the exit signs were from Austria (but the Israeli authorities rejected them for import and the builders had to adapt to the bureaucratic hurdle), and all other elements are sourced from elsewhere. It’s hard not to see the very existence of the Palestinian Museum as part of a conceptual project in exploring what is even possible here.

The building itself is a beautiful and stark structure that echoes the taste for minimal elegance in the art world. There is no groundbreaking architecture though, even if the terraced gardens really differentiate the institution from other art venues of this type. Labeled with names that would make a hipster’s head explode with envy — including “Aromatic Garden,” “Medicinal Garden,” and “Olive Garden” (*cue hipsters giggles*) — the gardens are hard to differentiate when on-site because they visually blend into one another, though a veteran gardener may spot these easily.