The Metropolitan Museum’s premature revelation that it might take advantage of the Association of Art Museum Directors’ relaxed deaccession standards, by selling art to help pay for “care of the collection,” was an object lesson in how not to roll out a controversial, temporary policy change. The predictable chorus of condemnation that ensued caught the attention of NPR‘s Rachel Martin, who subjected director Max Hollein to a grilling, flavored by quotes from the fiery diatribe that former Met director Tom Campbell posted on his Instagram page (which Campbell followed up with a more considered essay in Apollo magazine).

Campbell was the most prominent of those who piled on as soon as the possibility of the Met’s sales was announced (even though no final decision had yet been taken). As someone who in 2017 left the Met in a financial mess, Tom is not an ideal spokesperson for responsible stewardship. Nevertheless, he seized the opportunity to second-guess his successor. (There’s been a lot of that happening lately—a symptom of these turbulent times.) 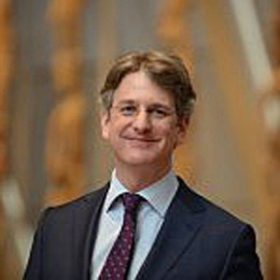 I did a doubletake at the damaging, erroneous statement made by Martin at the start of the NPR segment, which Hollein surprisingly failed to counter with the facts:

“You’re facing a $150 million deficit because of the pandemic.”

Hollein let Martin’s misrepresentation slide, vaguely noting that “the Met is a very strong institution, so it’s not an existential question.” (Actually, it’s a factual question that Max should have tackled head-on.)

As seen in the Met’s most recent annual report, its deficit in Fiscal 2020 (ending last June 30) was $7.7 million, but that was only after some $32 million from a recently established $75-million “Emergency Relief Fund” (consisting of reallocated flexible endowment funds and new fundraising from Trustees and key donors) was used to defray operating losses. (The previous fiscal year, there was a $2.3-million operating surplus.) As I confirmed with a Met spokesperson, the $150-million figure alluded to in the NPR report was not a “deficit” but a shortfall—the difference between the revenue the Met estimated it would have received from March 2020 to the end of June ’21, had the pandemic not overturned all expectations.

That said, the same mischaracterization of the “$150 million” was perpetrated by the Met itself, in the Aug. 5 letter sent by Director Max Hollein and President Dan Weiss to the Met’s staff (a copy of which I obtained), which had explicitly referred to “measures to combat our projected $150 million deficit [emphasis added].”

In his NPR comments (which you can hear in full, here), Hollein objected to Campbell’s characterization of the relaxation of AAMD’s guidelines as “a slippery slope”—the same language that I had used in my early analysis, last April, of AAMD’s altered stance. I reiterated the “S” words in October, after the slope was greased by the Baltimore Museum. Hollein dodged Martin (and Campbell) by stating: “I think the slippery slope would be if we as museums would dip into our endowment for funds that we have for operations and diminish them, because that would have enormous effects in the long run.” 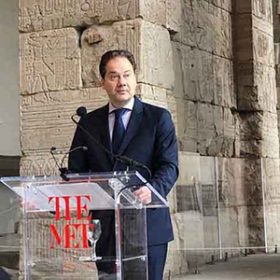 But raiding the collection for quick cash could have harmful effects in both the long and the short run, not only because of the loss of museum-quality works (as would have happened in Baltimore, had it not withdrawn, at least temporarily, from the planned disposals at Sotheby’s), but also because of the loss of donor confidence that their benefactions would be preserved, not monetized.

The Met’s possible deviation from AAMD’s formerly bedrock principle—that deaccession proceeds could be used only to fund art acquisitions—is expected to be discussed by the museum’s board this week. Its spokesperson told me, in response to my query, that the “collection care” purposes towards which the proceeds might be put, if the board and administration decide to take advantage of AAMD’s relaxed guidelines, are “conservation, preservation, registration and storage,” including the salaries of staffers engaged in those activities. (AAMD leaves it up to each museum to define what “collection care” means for this purpose.)

Hollein (whose position was recently renamed, “Marina Kellen French Director,” in acknowledgement of the support of a trustee/benefactor) recently published a blog post on the Met’s website that might have been an attempt at damage control after Campbell’s Instagram attack. He noted that even with the relaxation of deaccession guidelines, “we would still have more than sufficient dedicated endowment funds for acquisition activities….The amount of our deaccessioning would not be unusually large, yet revenue from these sales, which is traditionally used to purchase art, could instead be devoted toward salaries and other direct collection care costs in light of the historic crisis we face.” He noted that this redirection has “a two-year window.” But when I asked a museum spokesperson what the Met might do if AAMD’s “window” were to be opened wider, he did not rule out taking further advantage beyond the current two-year limit.

A palate-cleansing corrective to this unappetizing situation can be found in Stories from Storage—a current show (to May 16) at the Cleveland Museum of Art, whose director, William Griswold, had been my favored candidate to succeed Campbell at the Met. 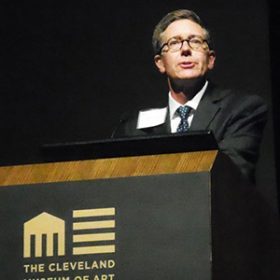 As exemplified by the Cleveland initiative, storage collections are important resources for teaching and research, and you never know what compelling combinations and refreshing insights an enterprising curator might come up with. In case there’s any doubt that this show has a polemical point to make, here’s the concluding sentence of Griswold’s introductory essay for the detailed exploration of this multi-part exhibition that occupies the bulk of the museum’s Winter 2021 members magazine:

“We encourage you to make your own connection with the works in the show, each of which we proudly hold in trust for the benefit of all the people forever [emphasis added].

UPDATE: After publishing this post, I learned that on Oct. 7, the Cleveland Plain Dealer‘s art critic, Steven Litt, had reported that the Cleveland Museum was applying some $1.4 million from deaccession proceeds already in hand “to conserve works in the museum’s collection,” in accordance with the AAMD’s relaxed guidelines. “He [Griswold] also said that no additional deaccessioning is planned to raise revenues.”

Admittedly, I haven’t seen the Cleveland show (nor any other show, since the start of the pandemic) and I’m not in the habit of reproducing press releases at length. But this creative response to the current budgetary challenges, which takes an opportunity to unearth, exhibit and interpret objects in storage (rather than offloading them for cash), seems to me a needed corrective during this monetizing moment, as we enter the second year of the global pandemic.

From the Cleveland Museum’s press announcement:

When the pandemic upended international travel in March 2020, temporarily delaying projects that had been in development for years, the museum reimagined its schedule of exhibitions by drawing on its own resources. Stories from Storage offers a thoughtful and focused examination of multiple important themes through seldom-seen works of art carefully selected by each of the museum’s nearly two dozen curators. It conveys not a single, linear narrative but multiple stories that complement one another.

Stories from Storage features an anthology of 20 short stories told by the museum’s director, chief curator, curators and director of academic affairs and associate curator of special projects, all of whom communicate surprising new insights about the objects they have chosen from the CMA’s vaults. Alternately philosophical, humorous, contemplative, playful and historical, each story reveals a unique element within the museum’s encyclopedic collection, representing human creativity across the globe, from the ancient world to today.

Kara Walker, “The Republic of New Afrika at a Crossroads,” 2016 ©Kara Walker. (The work that Griswold himself chose to elucidate in “Stories from Storage,” along with Key Jo Lee, assistant director of academic affairs).

“This wonderful new exhibition offers a glimpse into our vault, making available works rarely, if ever, before seen by the public,” said William M. Griswold, director of the Cleveland Museum of Art. “In Stories from Storage, visitors will experience a range of curatorial approaches, expanding our visitors’ understanding of the museum’s collection by adding to, elucidating or even complicating the chronicle of art history we present in our permanent collection galleries.”

Stories from Storage demonstrates how museums shape historical narratives, each of which is told through a lens that prioritizes specific perspectives that are influenced by various factors, including time and place, the background of the curator, cultural and social trends and opportunities to tell new and different stories. While the CMA has more than 61,000 objects in its permanent collection, only about 4,000 are on view in the galleries. Works remain in storage for various reasons: some are light sensitive, some have condition issues, some have contested attributions and others simply do not fit into the narratives or finite spaces of the galleries [emphasis added]…