You are here: Home » Articles filed under: 'News' » Article: 'Paris Museum of Man' 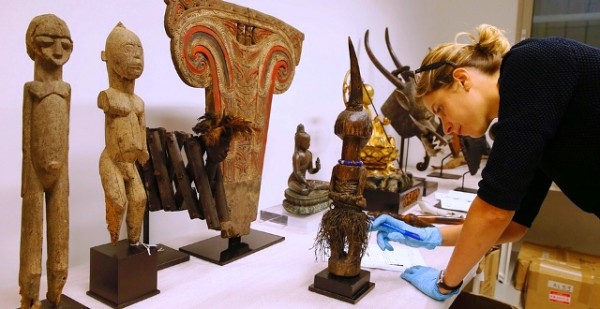 A scientist inventories objects donated to the Museum of Man. Source: The Guardian. Photo: Patrick Kovarik/AFP/Getty.

For years they’ve lain in dim corridors gathering dust, only rarely making forays into the wider world. They are some of the world’s most fascinating discoveries, which help tell the story of human evolution. Now treasures ranging from the remains of Cro-Magnon man to the celebrated 23,000-year-old Venus of Lespugue – as well as René Descartes’s skull – are once again to go on show with the rebirth of one of the world’s greatest museums of prehistory.

More than a decade ago Paris’s Musée de l’Homme was facing extinction. Former president Jacques Chirac had purloined half of its collection for his grand legacy project, the Quai Branly museum of arts and civilisations, leaving the mankind museum without a raison d’être.

Although it still had its unique collection hidden away in an ageing building whose 1930s parquet floor creaked and cracked, visitors dwindled and the future looked bleak. So the museum did what it knew best … it evolved.

This week President François Hollande will unveil the new museum after a six-year closure and a €92m facelift.