Farewell for Dr Patrick Greene
by Rufus Black, President of the Museums Board of Victoria 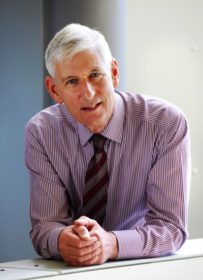 Good evening everyone. I’m Rufus Black, the President of the Museums Board of Victoria.

I am delighted to welcome you to Melbourne Museum for this very special event as we farewell Dr Patrick Greene.

Before we begin I would like to acknowledge the Wurundjeri people of Kulin Nation, the Traditional Owners of the land on which we are gathered, and to pay respects to Elders, past and present and to all indigenous people present with us this evening.

I would also like to take a moment to particularly welcome:

This evening we celebrate the achievements of Dr Patrick Greene who over the last 15 years has been responsible for writing an important chapter in the life of the this remarkable public institution. It wonderful to do with so many who have played important parts in this story gathered here.

It is a story that begins in the testing times of the Museum’s rebirth here in Carlton.

Back then inside this magnificent Denton Corker Marshal building, which Patrick has described as one of the best museums that opened worldwide around the time of the Millennium, it was a challenging time.

In an interview back in the 2007 my predecessor Harold Mitchell observed that Patrick arrived to ‘to find an operating black hole [of some $6m dollars]’ and a ‘place that wasn’t settled at all. As well as funding difficulties, there was staff problems and the relationships with the State Government and others were not good’. Attendances were in decline, and Dr Tim Flannery had led the criticism of exhibits comparing them with Disney Land.

Patrick and Harold worked with the Bracks’ government to see free admission for children and concession card holders and reduced prices for adult’s at all three museums while securing the ongoing funding to create the kind of high quality exhibits that would draw people back.

That funding saw the Museum build a world class in-house capability to develop compelling galleries now also rich in both story and learning.

From that production house where scholarship and art met in a unique alchemy came a series of great exhibitions, many still very popular to this day: Getting In, Bugs Alive, The Mind exhibition, Marine Life, Victoria evolves, the Dynamic Earth, and the Melbourne Story to name just a few.

And perhaps the crowning achievement was the recent opening of the Pauline Gandel Children’s Gallery, a truly beautiful fusion of the best scholarship on early learning with enchanting design.

Indeed thanks to that Gallery visitor numbers are up by over one third since it opened as the youngest Victorians and their parents fall in love with the Museum once again.

Patrick ensured that the momentum of the Museum’s own productions was accelerated by great Touring Hall exhibitions.

Some were great because of the numbers they attracted: The Tutankhamun exhibition still holds the record for the most visitors of any museum or gallery in Australia and Titanic, Jurassic World and A Day in Pompeii where all hugely popular.

Others were great because of the important stories they told. I know Patrick is particularly proud of Hidden Treasures of Afghanistan exhibition, which opened up a fascinating world of ancient artefacts from a country that is more usually associated with terrible conflict.

As the public returned and the Museum settled into its new era Patrick attended to vital task of integrating this network of Museums and enhancing the collections management and scholarly strength upon which enduring great museums are built.

Much has been done to enhance the management and storage of collections. A symbol of this improvement is that when he arrived the collection was managed through 50 databases of varying quality, today there is just one and over a million of the items are now accessible through the Museums website.

Building on the collections of the past Patrick has laid the foundation for vital collections of the future. Most notably with the opening of the Ian Potter Australian wildlife Biobank. As Australia’s first biobank for the mass and long-term storage of wildlife tissue samples the facility ensures Museums Victoria continues to play a vital role in genetic research into Australian wildlife.

Unlocking the value of these collections requires expert scholarship and a network of strong institutional collaborations. Those here from the Board in Patrick’s earlier years will no doubt recall a workshop in Geelong where a commitment was made to boost significantly the Museum’s research and publication activity.

That commitment has seen Victoria become known in the academic world as a home for leading Museums based research. Last year our Humanities and Science researchers were awarded a record $1.6 million in the Australian Research Council linkage project grants. With an annual research output of around 160 papers a year, including in the great journals like Nature the Museum is ensuring that the world of scholarship is enriched by its collections.

But Patrick has always been keen to make sure that knowledge reaches far beyond the world of scholarship. I am particularly taken by the Museum’s app ‘The Field Guide to Victorian Wildlife’, which provides an elegantly easy to use, authoritative and beautiful guide to the wonderful creatures of our state. Downloaded over 137,000 times the app has been spun off to cover other places.

The app is also integral to that vital project of our time to engage our whole community around a Science. Raised in the humanities but coming from Manchester’s Museum of Science and Industry, Patrick ensured that Scienceworks grew from 360,000 visitors to over half a million a year today, far beyond the capacity it was ever designed for, and of those 97,000 are school children. Indeed, in engaging school children Patrick has ensured we are truly world leading. Last year Museums Victoria had more school students’ visit at 287,260 compared to the British Museum with 259,000. On a per-capita basis it is especially remarkable level of engagement.

Beyond its broad mission Patrick saw that the Museum attended to the particular communities that make up Victoria.

First amongst those communities of course are the Aboriginal nations. So it was that Aboriginal communities throughout the State collaborated with Museums Victoria to develop First Peoples as an exhibition that speaks in an authentic Aboriginal voice.

As part of this process Museums Victoria worked closely with the Yulendj group of 16 respected community members and Elders who generously shared their knowledge and experience to shape their stories and the exhibition.

Patrick also ensured that communities who recently arrived in these ancient lands could celebrate their stories and identity. During Patrick’s time over fifty communities have staged exhibitions or held festivals at the Immigration Museum.

I know Patrick is particularly concerned that we work to maintain a society that welcomes such communities and that he takes particular pride in the Identity- mine, yours, ours exhibition, which is designed to challenge pre-preconceptions and value diversity.  It is a powerful experience, with the participatory enactment of a racist incident on a tram challenging everyone.

There are moments when a particular community and history collide and Museums are called upon to respond. How they respond in those moments says much about their leadership. Just yesterday we had the anniversary of the terrible of events of Black Saturday and the Museum will ensure that day is always remembered. The Victorian Bushfires collection is home to stories and artefacts often changed out of all recognition by the ferocity of fires. And a brick chimney, all that was left from a fine house in Kinglake, was dismantled and re-erected in the Forest Gallery where it stands as a reminder of the fires and a tribute to the communities that were affected.

But perhaps what says most of the sort of Museum Patrick led was that the museum, quietly and without fuss as is Patrick’s way, ensured a young boy had a place for his birthday party even though he no longer had a home.

So in Patrick’s important tenure he has made this remarkable network of Museums a home not just for this boy but for so many Victorians and their communities. He has made it a place of welcome for visitors from around the nation and around the world. And he has made it place of inspiration and delight, which he hands on to the future with the same expansive hopes for it that he brought to it those 15 years ago.

So we as the community of Victoria say thank to you Dr Patrick Greene.