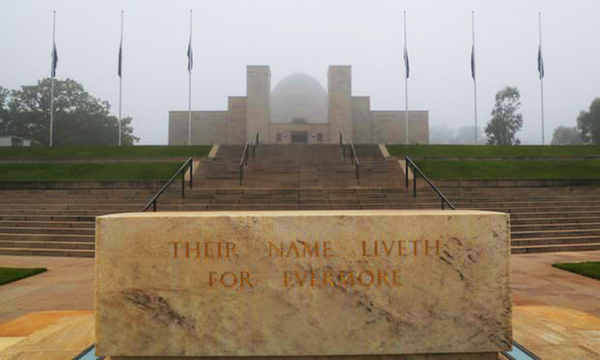 When the exhibition, From the Shadows: Australia’s Special Forces, opened at the War Memorial, alleged Australian special forces war crimes in Afghanistan were not included, despite the Brereton inquiry being 18 months old. Photograph: Mike Bowers/The Guardian.

The Brereton report highlights the folly of exhibiting on contemporary and current combat operations while the dust of battle is lingering.

Three years ago the Australian War Memorial launched its exhibition about this country’s special forces, the Special Air Service and Commando regiments.

From the Shadows: Australia’s Special Forces was an exemplar of the memorial’s direction under then chief executive Brendan Nelson to mount exhibitions about current conflicts, and was partly about the operations of special forces troops in the ongoing Afghanistan conflict.

As demonstrated by the release of the shocking findings of a long-awaited military inquiry into special forces war crimes in Afghanistan, too much of what the Australian SAS and Commandos did there has been secreted in those shadows for too long.

Each month more special forces troops were coming forward to the inspector general of the Australian Defence Force to inform on the alleged crimes of their comrades or to admit complicity – or both. And yet alleged Australian special forces war crimes in Afghanistan did not feature in either the exhibition or in much of the associated media coverage.

It is, in the memorial’s own words, “to assist Australians to remember, interpret and understand the Australian experience of war and its enduring impact on Australian society”.

In that context, the 2017 special forces exhibition is retrograde and contrary to the memorial’s stated mandate.

Indeed, the Brereton report highlights the folly of the memorial exhibiting on contemporary and current combat operations while the dust of battle is lingering.

Only time, consideration of the full record, and diligent history can bring real perspective.

Let the researchers and the curators do their work properly. The hot take – as the memorial has demonstrated – is worthless for its glaring omissions when held up to the unflinching eye amid full exposure.

Which brings us to the official history of Australian combat operations in Afghanistan. A team of historians is now researching these ongoing operations at the memorial, which has sponsored the production of Australian official war histories since its opening in 1941.

The Afghanistan volumes, covering Australian deployments from 2001 to 2014 (the history of subsequent Afghanistan operations will come later) is now being researched along with others about peacekeeping in East Timor (1999-2012) and combat operations in Iraq (2003-11).

The allegations of the murders of 39 Afghanprisoners by SAS and Commando soldiers, and their subsequent alleged cover-up, must now by necessity become defining elements of the official history. So, too, must the apparent blindness and deafness in the most senior echelons of Australian military command – even though the talk of special forces’ human rights abuses had been rife among serving and former special forces troops since perhaps 2011.

How an untouchable “warrior culture” came to permeate the supposedly “best of the best” troops, leading to the alleged “blooding” of new unit members through their shooting of unarmed Afghan captives, must surely now be as central to the official history as the regiments’ battlefield achievements.

Stockings and his team have well-deserved reputations for transparency. Those who know their methodologies and temperaments insist they will be unflinching when it comes to conveying the full, unvarnished doings of Australian special forces in Afghanistan – replete with alleged war crimes, testimonies under oath to Brereton and to ensuing civilian and military court cases and convictions.

Brereton’s report raises serious structural challenges for those working on the Afghanistan history project. It raised serious questions about the efficacy and reliability of elements of the military archive covering the combat operations of some special forces units in Afghanistan.

“It is a conundrum for those working on it because they must rely on file material, the pre-Brereton operational record that they have been provided with,” says a source with insight into the official history.

“So here you have authoritative, trustworthy and highly respected historians who have, in some cases, been provided with documents containing considerable redactions and others that are evidently rife with falsehoods, either by embellishment or omission.”

This is anathema to the way official history covering sensitive security areas is traditionally produced in Australia. Historians are vetted and afforded top security clearance. They are usually given open access in secure circumstances to requested, unredacted documents. Once written, a final draft is vetted by relevant security officials to ensure ongoing operational security and source protection.

A military source says patrol reports covering some special forces units in battles and on patrols during and after which alleged war crimes happened, have been “doctored” or “are notable for glaring omissions of some events”.

“Things were obviously happening that were not included [in the patrol reports] that they [the historians] are being provided with.”

The Afghanistan volumes were anticipated to have been written by the end of 2022.

Historians will now need to assiduously compare the “pre-Brereton” operational records of the special forces – produced in war zones by troops and elsewhere by officers – against Brereton’s findings and evidence that emerges in any civilian or military legal action.

Any impediments to the historical research (including omissions or retrospective amendments to patrol reports and other operational records) will necessarily become part of the official history.

It is an onerous responsibility for the historians involved. But it is one that, going by the reputations of those involved, will be met unflinchingly.

Stockings has already resisted pressure over the East Timor volume. The Department of Foreign Affairs and Trade – and former Australian ministers involved in the East Timor deployment – have long been eager to present Australia as the global hero of East Timor when the historical truth is more prosaic.