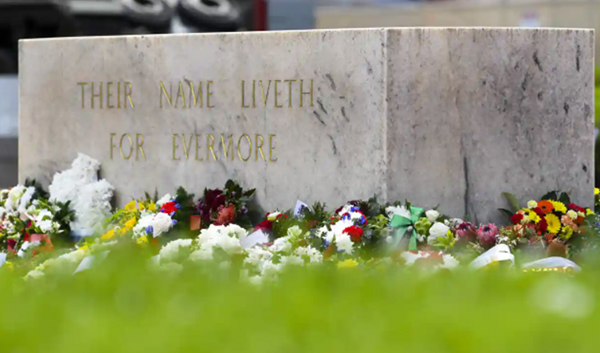 ‘It often seems as if the war memorial … is determinedly culturally retrograde when it comes to questions of historical truth-telling and fundraising.’ Photograph: Lukas Coch/EPA.

Paul Daley, An Australian War Memorial sponsored by weapons dealers is no place for quiet reflection on Anzac Day, The Guardian, 25 April 2o22

Checking in on Anzac Day commemorations at the Australian War Memorial today? If so, besides paying appropriate respect to our service personnel, perhaps consider just how contorted the official memorialisation of war has become in this country.

This should be a day of quiet reflection. It should be one to reflect not only on the experiences of the Australians and New Zealanders who, disastrously, helped invade Gallipoli 107 years ago (to retreat before Christmas), but more broadly on war’s impact on humankind – which is what Anzac Day has evolved into.

The memorial’s historic mandate – “to assist Australians to remember, interpret and understand the Australian experience of war and its enduring impact on Australian society” – is noble and important. It is not about the promotion of war or its machines of destruction. It is not about soldierly heroics.

It is about bringing insight into what war does to individual humans and societies. Needless to say, most of what it does is hideous, as demonstrated by the worst conflagration since the second world war that is now playing out in Ukraine.

But with the dawn of every Anzac Day in recent years, the memorial falls ever shorter of that duty.

It is drifting closer to becoming some military Disneyland, with an unnecessary $500m expansion so it might display more military hardware and stage exhibitions on contemporary conflicts before their impact can be properly assessed. It is steadily evolving into a place of entertainment, rather than reflection, that boastfully celebrates combat triumph and blokey derring-do – not least in terms of its questionable hot-takes on Australia’s failed Afghan mission and continued uncritical deification of special forces at a time when those units are mired in potentially existential moral/legal quagmires.

In recent years there has been a global renaissance in the way all sorts of collecting institutions tell their stories and face the often unpalatable truths about some objects in their collections and the histories behind them.

This renaissance extends to an ever more prudent consideration of who sits on their management boards and, critically, their sources of sponsorship.

But it often seems as if the war memorial – at once, uniquely, a war museum, a secular shrine of remembrance and archive since it opened in 1941 – is determinedly culturally retrograde when it comes to questions of historical truth-telling and fundraising.

Too much of the unpalatable battlefield and home-front truths about the Australian war experience are omitted. This includes the illegal battlefield (and postwar) killings by Australian troops in conflicts since the Boer war (as chronicled by Paul Brereton into his inquiry into ADF conduct in Afghanistan). Instructively, the memorial will appropriately tell the visitor plenty about the cruelty of Japanese captors to Australian PoW. But it is silent (publicly at least, though it holds evidence in its collections) of Australian killings of surrendered Japanese prisoners and of diggers’ trophy photographs with enemy dead.

There is, of course, another grievous omission from the memorial: its refusal to adequately chronicle Aboriginal resistance in the frontier conflicts with Indigenous people that were, effectively, the wars for Australia.

Recently a former director (1990-1994) of the memorial, Brendon Kelson, died. He was to my mind – and in the view of many historians who worked with him at the AWM – the finest, most politically independent and true-to-mandate leader the institution has had.

He fought the proposed memorial expansion devoting – as his friend, historian Michael McKernan, said in his eulogy for Kelson – “every minute of the day to this cause arguing persuasively, with clarity, and astounding energy for one who was so unwell. Brendon knew the fix was in and the fight could not be won. That was no reason to abandon it”.

More than once, Kelson expressed sadness that the memorial of recent years was becoming a military “theme park”.

As for the “fix” as McKernan so accurately puts it … it was well in place from April 2018, when then director Brendan Nelson (not to be confused with like-sounding, though poles apart, Kelson) announced, in a soft ABC story that was effectively PR for the institution, that the memorial would be expanded. Federal Labor has, largely uncritically, supported the project (such is the peril of challenging Anzac reverence, it seems; why, just ask Yassmin Abdel-Magied).

Nelson (a former defence minister who has sent Australians into conflict) was undoubtedly the most high-profile and politically influential of directors.

After finishing as director in 2019 Nelson went to work for weapons manufacturer Boeing, which – like other assorted arms makers including Thales, BAE and Lockheed Martin – has sponsored the memorial.

And this is the biggest perversion, the one I referred to above, of the memorial’s values, I think – something else to contemplate when it comes to the integrity of memorialisation. Should a building sponsored by companies that make the weapons of war be host on Anzac Day to the most public and revered Australian commemoration of war dead?

What is wrong with this picture? Discuss …

This week Guardian Australia revealed the memorial had sought a new funding deal from Lockheed Martin despite being inundated with opposition from many veterans, historians and retired memorial staff.

So, on what should be a day of quiet reflection – one far removed from the politicians who send young people to die in their wars but never go themselves, far removed from the companies that obscenely profit from combat and from those who’d obscure its callous truths – it pays to think about whether the war memorial remains the appropriate place for national Anzac commemorations.

I’m not alone in thinking that the money of weapons manufacturers has sullied the place as a stage for official commemoration of Australian war dead.