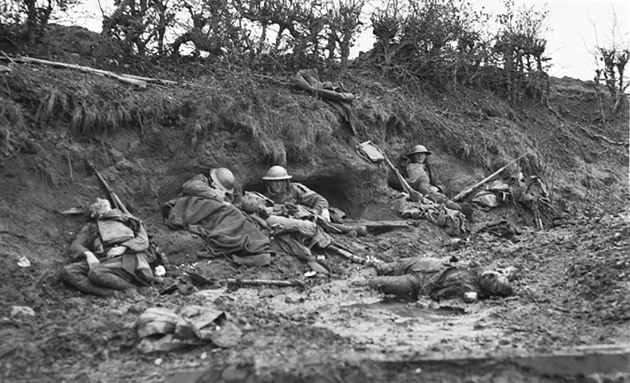 The horrors of World War I. Here, dead and wounded Australians and Germans lie in the railway cutting in the Ypres sector, Belgium, during the battle of Passchendaele. It is not certain who took this image but other images indicate that both Wilkins and famed Australian photographer Frank Hurley were present at the time it was taken, with Wilkins claiming it as one of his own. In time, the image has become one of his most famous pictures from the Great War. 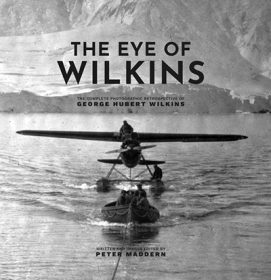 The Eye of Wilkins by Peter Maddern is available now. More info: wilkinstheadventurer.com.au/the-eye-of-wilkins

A pioneer pilot of early air exploration, Wilkins was also the first to travel under polar ice in a submarine. He would spend two years travelling across the top end of Australia collecting samples of fauna and flora for the British Museum, travel with Sir Ernest Shackleton on his final voyage to Antarctica in 1921, and record the battles and lives of Australians on the Western Front of the Great War under the leadership of Charles Bean.

As one reviewer wrote, no other man rode in the front seat, advanced in the front lines, or was otherwise caught up as witness to such an extraordinary array of world events as Sir George Hubert Wilkins. And yet, despite his outstanding reputation internationally, he was virtually unknown back home in Australia.

The Eye of Wilkins, released on what would have been his 133rd Birthday, celebrates his extraordinary photographs taken from 1912 to around 1939, during his adventures and expeditions all over the planet. 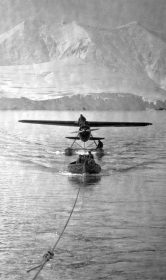 From the mid-1920s Wilkins made a series of flights to Antarctica. At the time, Wilkins’ goal was the circumnavigation of the ‘unknown’ continent for the purpose of setting up weather stations that he believed would measure changes in the air masses that governed the weather ten thousand miles away. Here, his Lockheed Vega monoplane prepares for take off from open water in Antarctica. Image courtesy the State Library of South Australia.

Australian Photography: What drew you to the project and Sir Hubert Wilkins?

Peter Maddern: I didn’t know about Hubert Wilkins until a little over three years ago, but that changed when I read Simon Nasht’s biography The Last Explorer. I was just so captivated by how he lived this ‘Boy’s Own Adventure’ life, that never seemed to end. Along with these adventures, he also had this remarkable ability to avoid being killed along the way. It’s hard to imagine anyone else ever matching his achievements.

What became apparent to me later was that nobody had brought his images together before, and I thought I might give it a go.

AP: How did you start to collate the images for the book?

PM: I initially reached out to the State Library of South Australia, and then from there the collection grew. By the end, I had about 7,000 images to work through, including about 5,000 from the Byrd Polar and Climate Research Centre at Ohio State University, and about 2,000 or so from the British Natural History Museum, the State Library of New South Wales, Dartmouth University, and the Australian War Memorial.

I think if you’re going to play the role of editor, you’ll have to back your own eye for what makes a good photograph. I put together an initial set of images that was about twice as many as made the final cut, and then refined it further. Many of the images were in varying condition, but most scanned for print very well. 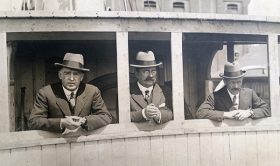 From Left to Right: Sir Ernest Shackleton, Alex Macklin and Frank Wild (second in command) in 1921 about to depart from London. As well as being the ship’s surgeon, Macklin also took photographs of the now famous final expedition for Shackleton, though neither he nor Wilkins was the expedition’s official photographer; he jumped ship in Rio de Janeiro. Wild would go on to write the definitive account, Shackleton’s Last Voyage. Macklin’s family would donate to the State Library of New South Wales the images he took and those given to him by Wilkins. Image courtesy: State Library of NSW.

AP: What do you know of the gear he used?

PM: Very little, although it’s safe to say it was pretty primitive, and all with photographic plates. To be able to take some of those images, especially in polar conditions with the reflection of the light off the snow must have been difficult – let alone the images where he was being shot at!

I included a couple of images in the book that were blurred, mainly because the subject matter warranted it. I felt these would have likely been taken when he had no time to set up his tripod, and I can imagine him putting the camera on his lap or holding it to his chest while these moments unfolded. 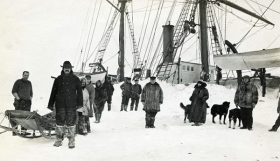 In May 1913, Wilkins joined the Canadian Arctic Expedition as expedition photographer and cinematographer. At the time, it was the largest and best resourced polar expedition in history, with four major ships and a dozen specialist scientists. Three years of exploration and research were planned on its ultimately futile quest to find the continent supposed to exist at the North Pole. In three years in the Arctic, Wilkins survived ice cracking beneath his feet, traveling in frost biting storms that the locals themselves pleaded he not attempt, and a fight with a polar bear where he was saved by the distraction provided by a barking dog. In this image, chief scientist Dr Rudolph Anderson and the crew of the steam-whaler, The Belvedere, on which the crew would spend three months, are pictured near Barter Island, Alaska. Image courtesy: Byrd Polar and Climate Research Centre

PM: If you look through the images in the book, you’ll often see someone looking back at the camera, or looking directly at the camera. Given Wilkins wasn’t taking multiple frames, this shows he had a real eye for ‘the decisive moment’ and what he was doing. I think he was a very good photographer, and he was capturing images well before many of the greats who followed like Henri Cartier-Bresson and Ansel Adams turned photography into an artform.

Ultimately, without him having an interest in the camera, there is no Wilkins story. He’d never have got his job in London, he would never have gone to the Western Front, or joined Shackleton’s expedition. In many ways, his photography is what links all his adventures together, and his images capture history like nobody else did. ❂ 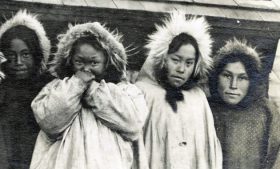 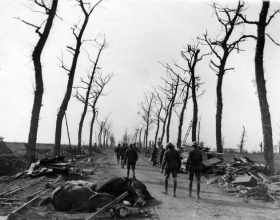 A scene on the Menin road beyond Ypres, Belgium. It was reported that the loss of horses, especially to shell fire that ripped open their lungs and required them to be immediately put down, was most distressing to their responsible soldiers. Of a similar image Wilkins wrote “This particular spot, during the various Ypres battles, was never free of such a scene as this photograph depicts. Image courtesy: Byrd Polar and Climate Research Centre. 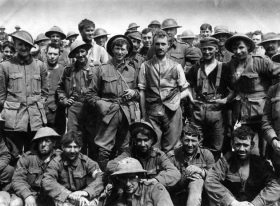 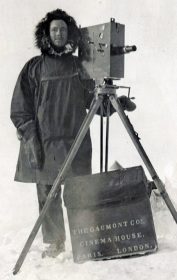 One of the earliest images of Wilkins working in the field is this from his time on the Canadian Arctic Expedition from 1913. The photo is also notable for the camera bag marking out its contents as the property of the Gaumont Company, his first employer after he arrived in London around 1912. Image courtesy: Byrd Polar and Climate Research Centre.

See also: Through the lens of Australian explorer Hubert Wilkins – in pictures