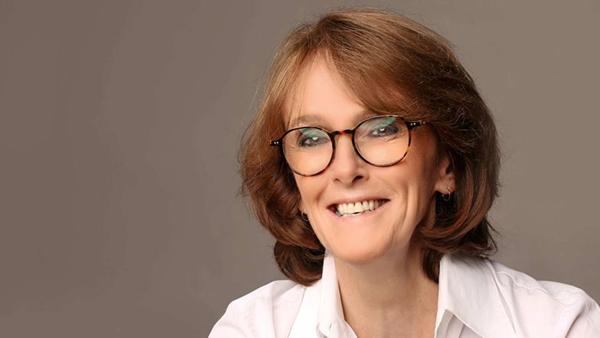 Australia’s next chief scientist will be renowned physicist Cathy Foley, who will commence the appointment in January.

And while stepping into the national role during a pandemic might put most people off, Dr Foley said this is “an absolutely fantastic time” to be appointed.

“We’re seeing government looking to advice from people who are experts to lead Australia out of COVID,” she said.

“Post-COVID-recession, we’re going to have a very different Australia, which has the chance to be more sustainable … with industries based on the fabulous research done here and elsewhere, because Australia must collaborate internationally.”

“I think the science sector in Australia is showing its greater relevance,” she said.

“As a consequence, what we’re seeing is government recognising that science, technology, engineering and maths are all things that it needs in order to navigate the world around it — something that’s been highlighted and probably accelerated with COVID.”

‘On a training path for this role’ 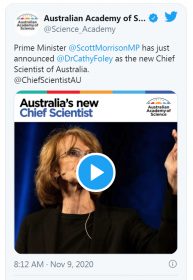 Dr Foley is no stranger to politics. As national secretary of the Council of Australian Postgraduate Associations in the 1980s, she and others successfully lobbied to double the value of postgraduate scholarships and ensure they were untaxed.

She has since served as president of organisations such as Science and Technology Australia and advised the Prime Minister’s Science Engineering and Innovation Council.

Dr Foley said her current role as CSIRO’s chief scientist was a smaller-scale version of her upcoming position.

“CSIRO is really good at taking early-stage work and turning it into scaled-up delivery, then engaging with government and industry.

“I’ve been involved with climate change, stem cells, health and biosecurity, mineral resources, manufacturing, astronomy and energy, so I’ve had a really good exposure to a whole range of science.

“In many ways, it’s almost like I’ve been on a training path for this role.”

“As a scientist, you need to be able to identify how best to take that into account,” she said.

“Where I hope I can bring value is being able to identify where … research is complete or is the best knowledge or information as possible, then what that means to translate into policy.” 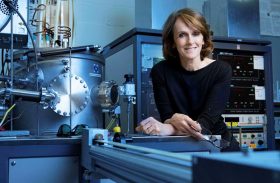 Dr Foley will be the second woman chief scientist. She follows astronomer Penny Sackett, who held the role from 2008 to 2011.

Dr Foley has long championed diversity in science and leadership, and encourages girls and women to study traditionally male-dominated realms of science, such as engineering, maths, and physics.

And in the face of a changing climate and more extreme floods and bushfires, she said Australia must recognise and harness the know-how that’s been here all along.

“There’s a huge opportunity for us to really dig into Indigenous scientific knowledge and learn from the tens of thousands of years of understanding of sustainability.

“We’ve been pretty arrogant not recognising what is there for us to learn from.

“I would hope that we get to a point where we will have an Indigenous Australian chief scientist in the future.”