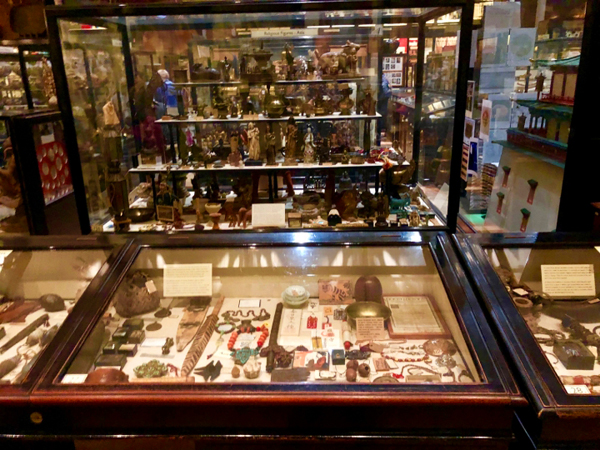 Cases of various objects at the Pitt Rivers Museum.

Originally defined as an academic museum of Anthropology and World Archeology, the Pitt Rivers Museum has morphed into something much more extensive and meaningful.

OXFORD, UK — The Pitt Rivers Museum, located at Oxford University, is one of the world’s great museums — one you’ve probably never heard of. Originally defined as an academic museum of Anthropology and World Archeology, it has morphed into something much more extensive and meaningful. Pitt Rivers is a museum of “stuff”: the amazing things that people make, globally, from antiquity to today. It houses over half a million items, many of them displayed in inventive and original ways. It will blow your mind.

Founded in 1884 by the immodestly named Augustus Henry Lane Fox Pitt Rivers, with an initial gift of approximately 30,000 objects, the museum has continued to grow; to this day it is actively acquiring items from around the world. In addition, it houses extensive collections of photographs, sound recordings, manuscripts and film, which are accessible by appointment. The sheer volume of its holdings is extraordinary. It has been central to the development of the field of Anthropology and the study of Material Culture.

Pitt Rivers was a relatively enlightened Victorian collector. Though problematic in a contemporary context, he saw the collection and display of objects from non-Western cultures as a way to understand the “evolution” of society. Following in the footsteps of Darwin, this was a flawed, but timely attempt to apply the startling new theories of biological evolution to other parts of human development.

For me, Pitt Rivers is a stunning and archaic monument to the history of collecting, a kind of museum about museums. Plus, the objects are jaw-droppingly fabulous. Materials, craftsmanship and passion combine to present some of the most stirring objects you’ll ever see anywhere. For example, the building’s atrium is dominated by a 383-foot-tall totem pole made by a Haida carver from British Columbia. Acquired in 1901, this monumental, spiritual sculpture rises from the floor of the museum opposite a full-sized sailing vessel, suspended from the cathedral ceiling. The scale and depth of the collection are unsurpassed among ethnographic museums.

Most ethnographic museums struggle, both with their place in contemporary curatorial practice and with the simple fact that their collections are often largely the result of wanton colonialism. How does such an institution make peace with its history? The contemporary curators of the Pitt Rivers Museum have sought to address these issues in several ways.

Resisting several ill-advised efforts to modernize the building and collections Pitt Rivers has added a separate, but attached building housing several new galleries devoted to changing exhibitons (as well as conservation labs, classrooms and archives). The original soaring three-level Victorian museum remains intact. The major move into the modern era occurred in 2016 when the museum  installed lighting. When I first visited seven years ago the building was almost entirely dark; visitors received flashlights to view the exhibits! While some of the mystery and thrill of discovery are somewhat tempered, the glories of the museum are definitely easier to see.

This summer the museum is hosting three exhibitions, each deeply moving in its own way. The space above the Haida totem pole now features huge black and white contemporary photographs of displaced Syrians living in Turkey in 2017. Entitled Syrians Unknown (through September 30), the photographs are accompanied by extensive details of the sitter’s life and displacement history in English and Arabic. Printed on Foamex by artist John Wreford, the faces of the displaced stare impassively at the vast museum below. It is monumental in many ways.