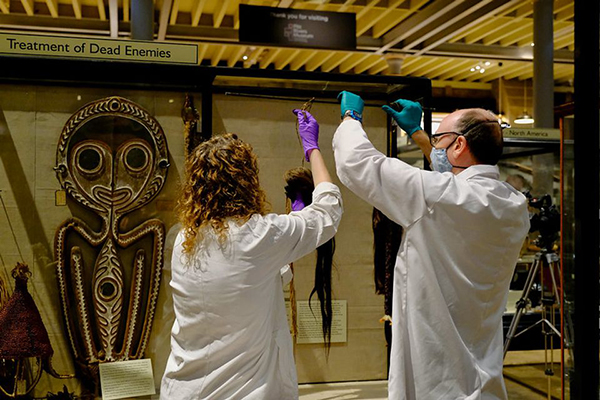 The shrunken heads at Oxford’s Pitt Rivers Museum have just been removed from display, after 80 years. In a case prominently entitled “Treatment of Dead Enemies”, they have long been the greatest attraction for many visitors, but will be hidden away in store when the museum reopens on 22 September after the coronavirus closure.

Known as tsantsas, the shrunken heads were made by the Shuar and Achuar people who live in the rain forests of Ecuador and Peru. Until the late 19th century the heads of dead male enemies were taken and preserved to acquire the powers that had been located in the bodies of their foe.

Tsantsas were made by peeling back the skin and hair of a severed head. The bones, brain and other matter were discarded, with the skin being soaked briefly in hot water to shrink it. The eye sockets and mouth were sewn shut to prevent the escape of what was regarded as a dead man’s soul, with the resulting heads ending up the size of a large orange.

The Pitt Rivers Museum has 12 tsantsas, acquired between 1884 and 1936. Of these, seven are human heads (the others are sloth and monkey).

Laura Van Broekhoven, the museum director, has been overseeing an ethical examination of the museum’s entire display, which contains over 50,000 objects. This has resulted in a total 120 objects made with human remains from all cultures being removed to the stores in the past few weeks, including the tsantsas.

Although there has been much discussion in recent years about change at ethnographical museums across the world, this has been intensified by repatriation claims and the Black Lives Matter protests.

The museum’s audience research has shown that visitors often see the displays of human remains as a testament to other cultures being “savage”, “primitive” or “gruesome”. Van Broekhoven says that “rather than enabling our visitors to reach a deeper understanding of each other’s ways of being, the displays reinforced racist and stereotypical thinking that goes against the Museum’s core values”.

She believes that action is now needed, not just talk: “Instead of waiting, we decided on a proactive approach—to take human remains off display, to go to the communities from where the objects came, and to work with them to find new ways of caring for these objects.”

With regard to the tsantsas, this involves consulting with Shuar and Achuar representatives. Miguel Puwáinchir and Felipe Tsenkush, Shuar leaders, have said: “We don’t want to be thought of as dead people to be exhibited in a museum, described in a book, or recorded on film… Our ancestors handed over these sacred objects without fully realising the implications.”

Although face-to-face discussions have been put on hold because of coronavirus, this will hopefully continue next year. Van Broekhoven has an open attitude as to whether it will mean the tsantsas “remain in store, are put back on show in a new display co-curated with the communities or repatriated to Ecuador and Peru”.