You are here: Home » Articles filed under: 'News' » Article: 'Please turn on your phone'

Please turn on your phone

Sophie Gilbert, Please Turn On Your Phone in the Museum, The Atlantic, October 2016 edition 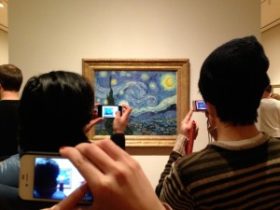 Earlier this year, at the Whitney Museum of American Art, in New York, visitors paraded through the fifth floor to see a retrospective dedicated to the abstract expressionist Frank Stella. Although many of the works on display were four or five decades old, in some ways the show felt tailor-made for the Instagram age: a riot of vibrant colors and textures, 20-foot-long reliefs, and sculptures as jagged and dynamic as 3-D graffiti.

Visitors one busy Saturday afternoon stopped in front of artworks, lined up shots on their phones, snapped a few photos, and then moved on to the next piece. Some paused briefly to consider a particular painting; more stared down at their screens, furiously filtering. Few noticed an elderly gentleman sitting on a bench in one of the smaller rooms, watching the crowd engage with his work. The only visitor in the gallery not clutching a phone was Stella himself.

Museum directors are grappling with how technology has changed the ways people engage with exhibits. But instead of fighting it, some institutions are using technology to convince the public that, far from becoming obsolete, museums are more vital than ever before. Here’s what those efforts look like.

1 | Curating for Instagram
About five years ago, the Metropolitan Museum of Art took a small step that has proved monumental: It stopped entreating visitors not to use their cellphones. The decision was driven by a recognition that cellphones are omnipresent in modern society, and fighting them is a losing battle. “People ask me what our biggest competition is,” says Sree Sreenivasan, until recently the Met’s chief digital officer. (He’s now the chief digital officer for New York City.) “It’s not the Guggenheim; it’s not the Museum of Natural History. It’s Netflix. It’s Candy Crush.”