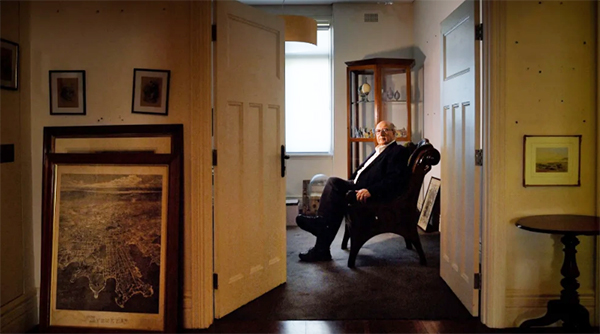 Nick Bonyhady, There’s a chair in there and it’s rare as well: Speakers say we should buy it, The Sydney Morning Herald, 21 October 2020

The first Speaker’s chair of the House of Representatives could be returned to public hands for the first time in decades after the government suggested the Museum of Australian Democracy consider buying it.

It was commissioned for Federal Parliament, then in Melbourne, and one account claims it’s the chair in which speaker Frederick Holder collapsed after presiding over an all-night debate in 1909, dying later that day.

Former journalist and businessman Trevor Kennedy has put the blackwood chair, most likely made in about 1900, up for auction on November 1 with an expected price of between $300,000 and $500,000 after selling and donating much of his collection of Australiana to the National Museum.

Assistant Minister to the Prime Minister, Ben Morton, told The Sydney Morning Herald and The Age he hoped the historic item could find a home at Old Parliament House, home to the Museum of Australian Democracy.

“I’d be delighted if there was an opportunity for the item to be donated to the Museum of Australian Democracy to form part of its collection,” Mr Morton said. “And I have asked the chairman of the museum [former finance minister Nick Minchin] to explore the potential of procuring the item.”

Mr Kennedy said he would not be giving away the chair after donating millions of dollars of artefacts — along with selling more than $8 million — to the National Museum.

“That’s about my limit,” Mr Kennedy said. “I do firmly believe that the chair should stay in Australia, but I do have a pretty firm view of its value and if necessary I’ll hang on to it.”

However, he said he would welcome MoAD buying the chair and called for more money for cultural institutions. “Museums are getting really sort of choked by a lack of funding,” said Mr Kennedy, who became a business investor after leaving journalism.

His collection, including the chair, was shopped around to several potential buyers in recent years and was set to be sold to a collector in Singapore before the government blocked its export on cultural history grounds about six years ago.

Speaker Tony Smith and former speakers David Hawker and Anna Burke agreed the chair should go to MoAD. “I think that it would be in the interests of the nation to try and recover it even if it’s going to cost money,” said Mr Hawker, who held the role under Prime Minister John Howard.

Harry Jenkins, a former Labor speaker, said acquiring it was worth considering, but added “it does seem a lot of money for a relic not well known”.

According to antique dealer John Hawkins, who helped Mr Kennedy acquire much of his collection, Mr Holder collapsed in the chair in 1909 at about 6am after exclaiming “Dreadful! Dreadful!” amid a rancorous all-night parliamentary debate. Mr Holder died later in the day from a brain haemorrhage. His family retained the chair, Mr Hawkins said, and Mr Kennedy later bought it. Auctioneers Leonard Joel have a different story: the chair was used at a ceremonial opening of Parliament and then retained by Mr Holder.

At the ceremonial opening of Parliament in 1901, Mr Hawkins said the Duchess of York sat in the chair to preside over the federation of Australia. It bears a “European Labour Only” label, denoting the chair had been made solely by Europeans, a requirement of anti-Chinese worker laws of the time.

The National Museum of Australia said it had been interested in the chair but could not afford Mr Kennedy’s price. “Given that there were a great many objects in this remarkable collection that the Museum wished to acquire and finite public funds to do so, the Museum agreed not to pursue further negotiations on this item,” a spokeswoman said.

A spokeswoman for the Museum of Australian Democracy said they have no plans to buy the chair.