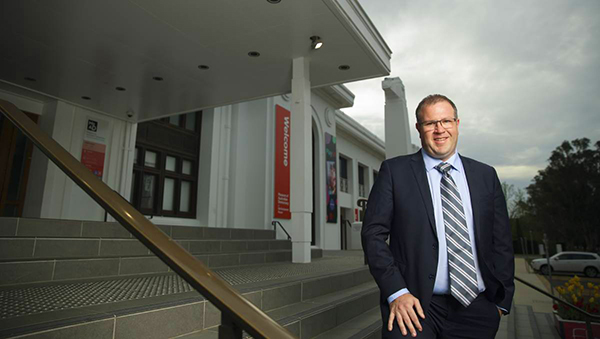 Assistant Minister to the Prime Minister and Cabinet Ben Morton at the Museum of Australian Democracy. Picture: Sitthixay Ditthavong.

The Museum of Australian Democracy has been warned by its minister to leave criticism about the nation’s political system to think tanks, amid concerns the institution has neglected its core mission.

Assistant Minister to the Prime Minister Ben Morton – the minister responsible for Old Parliament House – has issued a new statement of expectations for the museum, which requires it to return to its focus on educating and inspiring Australians about the “strength” of their democracy.

“You don’t go to Questacon leaving doubting science, and you shouldn’t go to the Museum of Australian Democracy and leave doubting the strength of Australian democracy,” Mr Morton said.

Mr Morton wants the museum to help teach visitors about the “essential role” political parties have played in Australia’s democratic history and encourage people to sign up to them.

He has called on the museum to explore the role of the public service in Australian democracy, with the Australian Public Service Commission already working with the institution to create a new exhibition about the Commonwealth bureaucracy.

He also wants the museum to educate people about Australia’s voting system.

“If there’s a year 6 kid that walks into that building and as a result of being educated, engaged and inspired to play one of those roles in our democracy in the future, well then that’s success,” Mr Morton said.

“There’s nothing partisan in what we’re trying to achieve here. I’m obviously from the Liberal Party, but if that year 6 kid decides to contribute to our democracy by being a member of the Labor Party, or the Greens, well then MOAD has succeeded as well.”

It follows the findings of a parliamentary inquiry in 2018 – which Mr Morton chaired – that the museum had crept from its original focus of helping Australians understand their democratic history.

“Its current and emerging focus on critical debates and discourse about democracy is best left to academic, think tank or media analysis,” the inquiry found.

The Museum of Australian Democracy recorded its highest ever number of school visitors in the first half of 2019-20, before the coronavirus struck. Nearly 56,000 students from more than 1000 schools participated in its onsite programs, which rated highly among teachers for quality (97 per cent) and curriculum relevance (99 per cent).

It also launched a new permanent exhibition, “Truth, Power and a Free Press”, which teaches visitors to be critical, hands-on consumers of media. However the museum has also sought to provoke conversations about the status of Australian democracy.

The museum’s Democracy 2025 program – a joint initiative with the Institute for Governance and Policy Analysis at the University of Canberra – has published research on Australians’ declining satisfaction in their system of government.

It has also collaborated with the London School of Economics to launch a Democratic Audit of Australia, which will provide “ongoing intelligence” on the strengths and weaknesses of Australia’s democratic institutions.

“You go to the Museum of Australian Democracy to be educated, inspired and engaged – you should be leaving with an understanding of how you can get more involved, you should leave with a greater appreciation of and affection to Australian democratic systems, which we should be all proud of,” Mr Morton said.

Mr Morton has also instructed the museum to seek “operational efficiencies”, including by possibly sharing gardening services and gift shops with Parliament House, so every dollar can be focused on “creating an engaging and exciting and inspiring experience”.

The museum would also be encouraged to seek out private sector sponsorship for new exhibitions.

The Australian War Memorial has copped criticism in the past over its corporate sponsorship, however, Mr Morton said the museum would pursue it in a different way.

“They won’t get a logo put on the side of the building, I can assure you,” Mr Morton said. However, there could be a backlash to any increase in private sponsorship.

The Community and Public Sector Union told the 2018 inquiry private sector support in Australia’s institutions often came with “caveats and conditions”. In the case of the National Museum of Australia, it meant exhibitions and events were often geared at getting sponsors. Government agencies like the Australian Electoral Commission and the Department of Parliamentary Services also said they did not consider it appropriate to accept private sector support, as the nature of their work required strict independence and political impartiality.