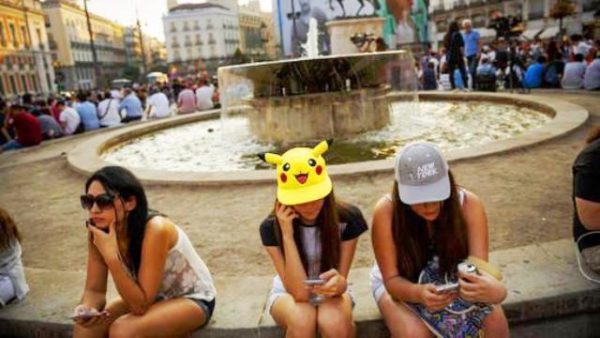 Yes, this blog post had to come. After two weeks of lurking and reading I was inspired to finally formalise my thoughts on Pokémon GO and what that means for museums. Is it just a fad? An annoyance (for those mums, like me, with sons who were obsessed in the early 2000s)? A game changer? Or something else??

We know from many years of audience research that museums are primarily social experiences (Kelly, 2013), and one of the strengths of games such as Pokémon GO is their social facilitation. As noted by Brown (2016):

“Pokémon Go is a social game – it thrives on interaction. For example, outside of the office where I work is a Pokestop. Yesterday there was a group of six people outside, swiping away as they tried to claim the hidden items inside. After talking to them I found out these people didn’t know each other and in fact Pokémon had brought them together. Six complete strangers were now friends as they discussed tactics and where they found their rare Pokémon.”

Virtual reality (or augmented reality) was identified in the most recent NMC Horizons report as one of the key technologies for education in museums, with an adoption framework of the next two-three years: “Museums realise that audience expectations are evolving and many people have already begun to embrace VR as an opportunity to experiment with new methods for engagement.” (Johnson, et al, 2016, p.42). This is made even more possible as 360 degree cameras are getting cheaper and the software needed to edit and create VR is easier to use and more widely accessible: “YouTube, Steam, and Facebook are just a few of the platforms that currently support VR, giving content producers the key ingredients to facilitate an accessible ecosystem for VR development.” (Johnson, et al, 2016, p.42).

We also know from many years of trying to keep up with the latest in technology and up-skilling staff that it is a never-ending battle to either get them interested or comfortable, and maybe easy games that tap into pop culture, such as Pokémon GO, can be a practical way of achieving this:

“… there is another layer to the game. For a vast majority of players, Pokémon GO is their first exposure to an augmented reality experience. … The game will cause AR experiences to blossom and will open the door to devices (like better versions of Google Glass) that will serve up AR to average people already comfortable with it via the game.” (MacPhail, 2016).