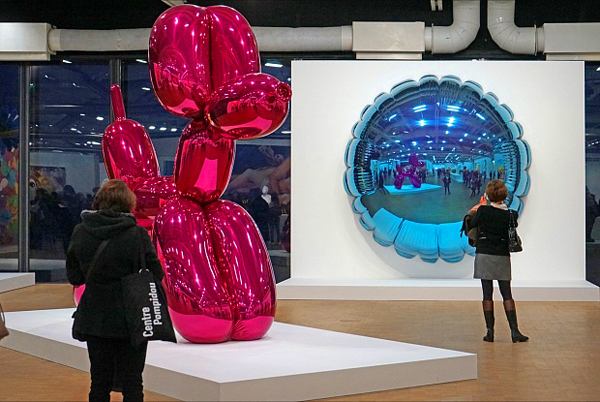 The sculpture Naked was reproduced in the catalogue for Jeff Koons’s 2014 retrospective at the Centre Pompidou (Image: Jean-Pierre Dalbéra).

Due to a €1.25m loan fee to the Whitney, the museum did not see many profits from one of their biggest shows ever.

The Centre Pompidou’s Jeff Koons retrospective in 2014-15 was the most attended exhibition of a living artist in the museum’s history, bringing in 650,045 visitors, which could have resulted in a significant financial windfall for the museum—but this was not the case. “The exhibition did not generate profits for the centre,” according to the verdict delivered by the Paris High Court on 9 March, in a plagiarism suit led by the heirs of the photographer Jean-François Bauret. The French institution only made €60,059 through the sale of three publications tied to the exhibition, the court documents reveal.

The court noted in its decision that the show generated €2.6m in ticket revenue and €320,000 in revenue from the sale of publications for the Centre Pompidou. But the French museum had to pay a €1.25m loan fee to New York’s Whitney Museum of American Art, which organised the exhibition (the precise terms of the agreement were not included in the court’s decision). A spokeswoman for the museum confirmed that it broke even with the travelling show, but did not reveal in detail what happened to the other half of the revenue, although she noted that bringing an exhibition like that to Europe comes with a number of associated costs, such as transportation and insurance.

Beyond the financial aspect, the court documents reveal the turnkey nature of the show, with the artist’s LLC not leaving the museum any choice in the contents of the catalogue or the works included. The arguments presented by the Centre Pompidou during the legal case—involving the reproduction of Koons’s sculpture Naked, which resembles an image of two nude children by the late photographer Jean-François Bauret—echo that. The museum said in its defence “that it acted in the framework of particularly strict contractual obligations with the Jeff Koons LLC under the direct influence of the American artist and that if it had been warned by the artist or the studio that the work Naked was potentially litigious, it would have acted differently”.

This was backed up by the court, which found that “the museum did not negotiate the conditions around the travelling exhibition and that it is Jeff Koons LLC that insisted that the work Naked be among those selected for reproduction in the exhibition catalogue, without warning the Centre Pompidou of the risk of a legal claim”.

The Paris museum said it was only informed of the existence of the copyright lawsuit on the eve of the show’s public opening, and was forced to urgently order a new print run of the catalogue without the controversial image, but some copies that included the reproduction of Naked had already been sold. The catalogues published by each museum are otherwise nearly identical, save for the addition in the Centre Pompidou’s version of a foreword by Alain Sebain, then the Pompidou’s president, and an essay by Bernard Blistène, the show’s curator.