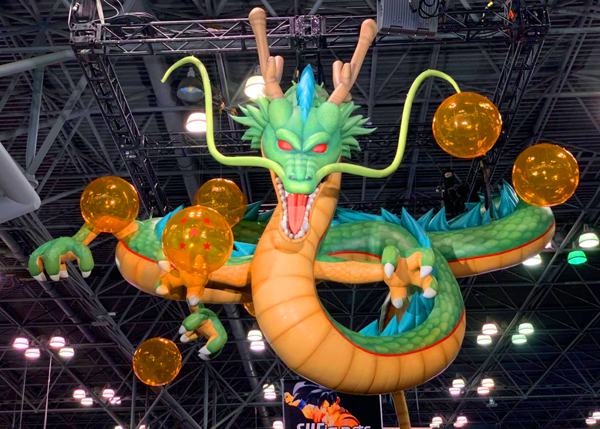 Sarah Cascone, The Pop-Up Museum Craze Infiltrates Comic Con, Where the Line Between Art and Merchandise Has Never Been Blurrier, 5 October 2018

New York Comic Con kicked off its 2018 edition yesterday at the Jacob K. Javits Convention Center, drawing legions of comic fans to the city’s far West Side. Known for its potent mix of art, collectibles, cosplay, and pop culture, this year’s con also reflected a broader art-world trend, with several booths that were clearly looking to capitalize on the pop-up museum phenomenon.

Even more than at your typical fine art fair, there can be great disparities between exhibitors at the Con. Consider the massive booth of Alex Ross—the official Marvel art gallery once likened him to “the Norman Rockwell of comics.”

His display is visible across the convention center thanks to a four-sided sign suspended from the ceiling. On the other hand, at the tiny tables in Artists Alley, artists man their own booths to sell their wares.

A Ross painting could run you thousands of dollars, compared to $20 prints of digital paintings by Lothlenan, created in Photoshop on a Cintiq tablet. Several of the latter artist’s works are based on art historical masterpieces but feature popular characters from video games and television shows. There’s a version of The Scream by Edvard Munch, starring the cast of Rick and Morty, and Princess Peach from the Mario video games appears in Johannes Vermeer’s The Girl With the Pearl Earring.

The series was inspired by a masters study of Thomas Gainsborough while she was in school. “I got a little bored halfway through and decided to switch things up,” the artist, whose real name is Andrea Tamme, told artnet News. A self-described art history buff, she tries to find characters who are a good match to the Old Masters. Gustav Klimt’s gilded The Kiss, for instance, was a perfect fit for Howl’s Moving Castle because the main character often transformed into a raven-like monster who hoards shiny things.

Artists Alley is a wonderful place to meet artists, and even see them at work. In a scene almost unimaginable at blue-chip art fairs, many of the artists will even make you a piece on the spot, creating custom pen and ink drawings of superheroes and other characters and tearing out the page from their sketchbook for you to take home.

On the other hand, the line between fine art and merchandise can be blurry at Comic Con. Euge, an artist and illustrator, has become something of a viral sensation with his creation Puglie Pug, an adorable food-loving dog he invented in 2014. “I just wanted to draw fat, stupid things,” he told artnet News. “Puglie made me happy, and lo and behold, a bunch of other people ended up liking him too.”

Two years ago, the company For Fans by Fans approached Euge about creating Puglie Pug merchandise. The character now has over 21,000 Instagram followers, and a line of stuffed animals, clothing, and other toys and goods that ranges from $4 to $45—plus a $6,000 inflatable version of the dog that towers over the booth.

There’s also a larger-than-life Puglie doghouse full of inflatable donuts that con-goers can pose for photos in. It was created for “Puglie: The World Is Your Donut,” the character’s first exhibiton, held at Gallery Nucleus in Los Angeles this summer. The dog house was just one of a number of interactive experiences that Euge willingly admitted were inspired by the Museum of Ice Cream.