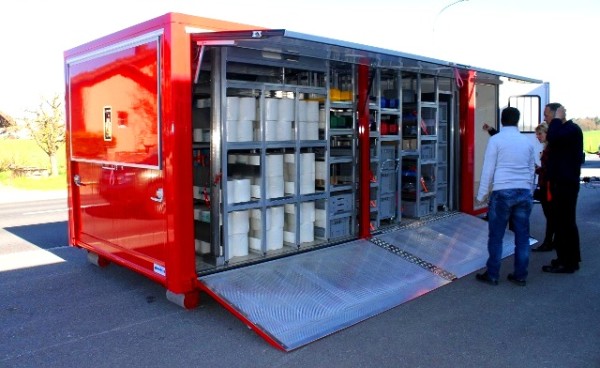 The unit contains everything from lifting devices to chemical-free blankets. Source: swissinfo.ch.

Geneva is believed to be the first city in the world with its own portable container to save cultural property in the event of local disasters. swissinfo.ch took a look inside.

In a storage yard in a non-descript part of Geneva, a shiny red container lies dormant. But open the flaps – an operation performed in seconds – and the 6m x 2.5m container becomes a mobile centre for the rescue or repair of heritage goods.

When fire, water or earthquakes damage works of cultural importance such as books, manuscripts and works of art, time is critical. The container dubbed ‘La Berce’ (French for cradle) is Geneva’s all-in-one solution.

Stocked with expert equipment, ventilators, filtered vacuum cleaners, hygrometers, natural sponges and even tiny sable brushes, the purpose of the container is to provide the tools for an orderly evacuation from danger zones or to arrest the degradation on site. It was recently launched by the city of Geneva and is waiting to prove its worth.

“We have gone to great lengths to put in place something that we’d rather not have to use,” said project coordinator Nelly Cauliez, head of conservation at the Library of Geneva. She has worked with political authorities, curators and conservationists, as well as the local security services, to coordinate the project and design the container.

The launch of the container as part of a bigger rescue plan has given Geneva an edge most other cities don’t have. A library bus equipped in a similar way is planned by the French section of the International Committee of the Blue Shield, but has not yet materialised.

“It has been a long time in the making,” Cauliez explained. The starting points were evaluations in 2007 and 2011 of the Geneva Library’s buildings where numerous security and climatic deficiencies were found, and have since been put right. But more importantly, an evacuation plan in the event of an unforeseen disaster, with a well-defined chain of command, was found to be lacking.

The 2008 fire that devastated the former chemistry school of the University of Geneva with the loss of more than a thousand books set the wheels in motion for a coordinated rescue plan. “It was a dramatic event, but a positive wake-up call.”

By 2009, the city of Geneva had adopted the ‘PBC’, a cultural heritage protection plan to cover the many institutions under its umbrella that range from the Ariana ceramics museum, the Conservatory and Botanical Garden, the Natural History museum, the Ethnography Museum Geneva, the Archives, libraries and the Art and History Museum, all with very different contents.

“We needed to pool our resources and systematise our practices, but we also needed to train the personnel. Poor handling in emergency situations can inflict more damage on heritage goods than the disaster itself,” Cauliez said.

But good intentions are useless unless put into practice, so Cauliez was mandated to set up an evacuation roadmap, using the Geneva library as a testing ground and working closely with the fire and civil protection brigades.