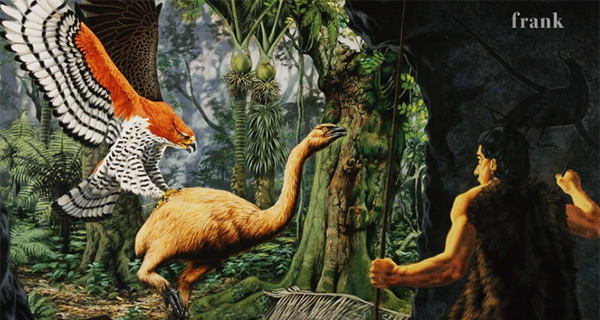 Until 150 years ago, European scientists believed the pouākai was just a myth. But the world’s largest eagle dominated the forested lands of the eastern South Island. Frank Film. Click here to view the video.

Frank Film: From fable to fact – the world’s largest eagle was once thought a mythical creature, Stuff, 30 July 2021

It was a perfect but petrifying predator. A massive bird with a hooked beak, talons like tigers’ claws, and a three-metre wingspan, plummeting down at speeds of up to 80kmh to attack its prey.

Europeans were originally sceptical of Māori stories and whakataukī (proverbs) that told of a giant eagle – the pouākai – attacking moa and carrying away small children.

Those doubts were dashed 150 years ago when Canterbury Museum taxidermist Frederick Fuller found a clutch of unusual bones among some moa remains in a swamp in north Canterbury. 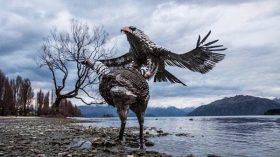 The pouākai – also known as the Haast eagle – was a fearsome predator, as depicted here in a piece by Wanaka-based artist Luke Wilson.

He passed these findings – a leg bone, rib and a couple of claws – on to museum director Julius von Haast, who issued the first scientific description of the bird.

He named it Harpagornis moorei after the Greek word harpax, meaning grappling hook.

In 1873 more bones were discovered, adding to a rare collection now held in an unprepossessing cabinet at Canterbury Museum.

For the first time, says Paul Scofield, the museum’s senior curator of natural history, European scientists had to admit the Māori whakataukī “were, in fact, correct”.

Since then, their bones have been found at more than 50 sites in the South Island. 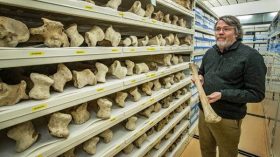 Some are up to 30,000 years old, others are estimated to be only 500 years old, showing that eagles and humans were around at the same time (Waitaha stories tell of a large, man-eating eagle living in the Castle Hill area killed by a group of 50 warriors).

Scofield points to a small, pointed object in the museum’s collection, originally found at Wairau Bar, one of the oldest Māori sites in New Zealand.

“It was used by Māori to make holes in sealskin – it is one of the very few objects made from the bone of a pouākai.”

Such findings are rare. Found only in the South Island, there are only about 50 to 100 individual specimens in museums worldwide.

“In the landscape,” Scofield tells Frank Film, “they were also very rare, with less than 1000 pairs alive at any one time.” 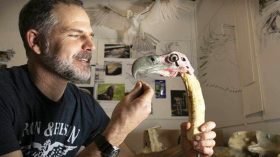 While they couldn’t have carried the weight of an adult human, “they definitely could have carried a baby. And we know that they predated moa, one of the largest birds that ever lived”.

Visitors to Museum of New Zealand Te Papa Tongarewa can now see a life-size replica of this legendary bird, a large, sombre brown eagle glaring down through outstretched talons.

“It was such an amazing bird,” explains exhibition services manager and model maker Jake Yocum.

“This is an eagle which was not just large in wingspan but also in sheer bulk and size and muscle. The legs were really solid and the talons were so powerful.” 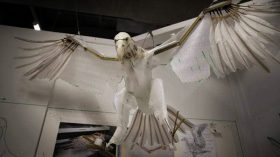 The pouākai had a wingspan of about three metres – and would hit prey at about 80khm. Ross Giblin/Stuff.

Weighing up to 14 kilograms, they would have hit their prey – moa, takahē, flightless geese and ducks and, potentially, small humans – with the force of a large stone being dropped from a great height.

Yocum points to the lacerated pelvis of a female moa weighing 180kg to 200kg, about 14 times that of the Haast eagle.

“These are the actual puncture marks of the talons of the Haast eagle. To puncture the muscle in the bone is quite incredible.”

DNA studies show the pouākai’s nearest relative to be the little eagle of Australia. 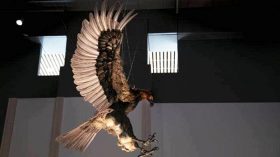 Pouākai are thought to have died out when their main prey, the moa, became extinct. Ross Giblin/Stuff.

“When it turned up here it had this unlimited food source,” explains Yocum. “As most apex predators do, it just continued to evolve.”

Despite competition from adzebills, the pouākai quickly became the apex predator, the only known example of an eagle species becoming the top predator in a complex ecosystem.

Then, they were gone.

“We can only surmise that they died out because their major prey, the moa, became extinct,” says Scofield. “We know they probably became extinct at precisely the same time.”

So we should have believed the oral histories in the first place?