When you are the boss of a major museum, long-term planning is part of the job, and the director of Sydney’s Powerhouse Museum is now thinking further ahead than ever before.

Rose Hiscock has announced a four-year program for the institution and its sister facilities, the Sydney Observatory and Powerhouse Discovery Centre at Castle Hill in Sydney’s north-west.

She said it was the first time an Australian museum had programmed its exhibitions so many years in advance and the focus was on home-grown, so-called blockbusters.

“Rather than buy in the blockbuster, we want to create our own,” she said.

Exhibitions to be curated locally a include a 25-year retrospective of designer Collette Dinnigan’s work, scheduled for August 2015, and A Fine Possession: Jewellery and Identity, displaying the museum’s collection of 700 pieces made in Australia.

Ms Hiscock said no other Australian museum had a similar brief to hers.

“Our vision is to be the best,” she said.

It will host an exhibition of 350 years of underwear fashion from London’s Victoria and Albert Museum, and the London Science Museum will bring its multi-media exhibition explaining the history of the world’s most powerful particle accelerator, the Hadron Collider.

During the 2017 Sydney Gay and Lesbian Mardis Gras, the Powerhouse will host a history of men’s fashion curated by the Los Angeles County Museum of Art.

The museum is also borrowing an approach from the festival circuit by introducing exhibition “seasons”, including programs covering China, the circus and social activism.

Ms Hiscock said the Powerhouse Museum would also improve its integration with Darling Harbour, which is undergoing a major redevelopment.

“We’re working on a master plan at the moment,” she said.

“This venue is in one of Sydney’s most dynamic parts of the city that’s changing radically.” 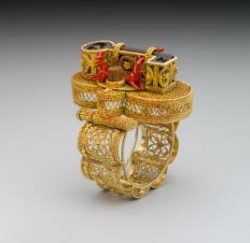 Bracelet 'Java-la-Grande' designed & made by Robert Baines, Melbourne, 2004-2005 Source: Powerhouse Museum
Positions Vacant » View All
» Team Leader, First Peoples Art & Culture – TMAG
» Booking Services & Rostering Officer – SLM
Latest News » View All
Egyptians petition for BM to return
the Rosetta Stone Read more.
BM pledges ‘not to dismantle’ Parthenon
sculptures amid reports of talks with Greece Read more.
NHM to install life-size Titanosaur
cast The world’s largest dinosaur to fit (- just) Read more.
Gallerie d’Italia’s Art & Finance exhibition
- a long & mutually beneficial history Read more.
TMAG’s ‘Lost’ last Tasmanian tiger remains
found! ... cataloguing collections matters Read more.
Top +
Council of Australasian Museum Directors c/o Mr Brian Oldman, South Australian Museum PO Box 234 Adelaide, South Australia 5001 Australia, © CAMD 2022
Copyright: All information and resources provided on this website remain the copyright of the Council of Australasian Museum Directors. Permission is granted for viewing and downloading for personal and not for profit purposes. Those wishing to reproduce any materials for commercial, educational or other uses are requested to contact us.
Disclaimer: The content of this website is provided for information purposes only and is not intended as a substitute for professional advice. No claim is made as to the accuracy or authenticity of the content of the website. The Council of Australasian Museum Directors does not accept any liability to any person for the information or advice (or the use of such information or advice) which is provided on this website. The information on our website is provided on the basis that all persons accessing the site undertake responsibility for assessing the relevance and accuracy of its content. No responsibility is taken for any information or services which may appear on any linked web sites. Hostgator.
.