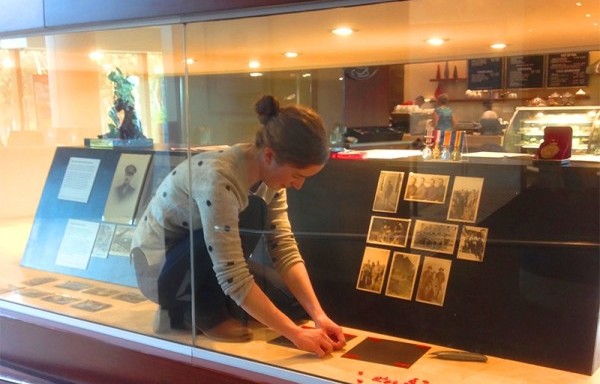 On Saturday, 25 April this year, Australia marks 100 years since the landing at Gallipoli during World War I. As part of proceedings to mark this significant anniversary, MAAS has collaborated with Castle Hill RSL Club on a special exhibition for their members and guests. The Centenary of ANZAC Exhibition combines objects from the MAAS collection, the Castle Hill RSL collection and personal archives held by members of the local community. It’s on display until 29th April in the main foyer of the Castle Hill RSL Club. Curatorial volunteer, Kate Clancy, reports on the installation process.

As a curatorial volunteer, I was given the opportunity to assist with the installation of the Centenary of ANZAC Exhibition at Castle Hill RSL Club on Monday 30th March. The exhibition is an opportunity to collaborate in creating an exhibition and bring together objects from the MAAS collection with those held by Castle Hill RSL Club. Along with Assistant Curator Damian McDonald and Conservator Rebecca Main, the exhibition came together in a large showcase. Assisting with the installation was insightful and rewarding, as it is a centrepiece for the RSL Club’s calendar of events leading up to ANZAC Day, and provides an opportunity for members and visitors to reflect on the stories and images on display.

The World War I objects in this exhibition provide a personal perspective from family archives, including medals, unique photographs and publications for soldiers. Highlights from the exhibition include a solider portrait of Robert Millikin, an accountant from Hurstville who was 18 years old when he enlisted. His portrait (at the top of this post) is one of 400 from MAAS Museum’s Tyrrell Collection. In this exhibition the portrait is placed alongside a photograph of Millikin’s great-great nephew, who is wearing Robert’s medals, including the Military Medal, which was awarded to him in September 1918 in recognition of his bravery in an attack on Péronne.

The display includes a selection of photographs from the Felton collection which was donated to the Castle Hill RSL Club by the Felton family. It is significant in the array of photographs providing insight into life on and off the battlefields of the Great War. The photographs on display depict a different view of war, such as soldiers playing cards, a group of men watching as soldiers sparred, as well as some unique tourist shots. Lieutenant Corporal Roy Felton went on to become a decorated soldier, being awarded the Military Medal in 1917 and bar in 1918. His medals are also on display in the exhibition.

A special story is told with a selection of objects that once belonged to Lieutenant Col Alexander Matheson, whose military careers spanned 40 years. These objects were loaned by David Want, pictured at right in the image above, who discovered this archive of war in a large trunk under a house in the Hills District that was to be demolished. The objects tell the story of Matheson’s time serving in Gallipoli, France and Belgium through letters, photos and medals. He enlisted in the Australian Imperial Forces (AIF) on August 15th 1914 in Perth. After serving in the AIF, he went on to join the Queen’s Own Cameron Highlanders in 1902 and was attached to the Indian Army from 1912-1914. Unfortunately little else is known of Lt Col Matheson, who died of a sudden illness in 1943 (Jordan 2014).

As a curatorial volunteer, the opportunity to be involved with creating an exhibition that I would personally love to see has been insightful and rewarding. I learned that there are many steps in the process towards the end product of an exhibition in terms of interpretation and logistics. I now have an even greater appreciation of the work and thought involved in creating a meaningful combination of objects, images and words that results in a successful exhibition.