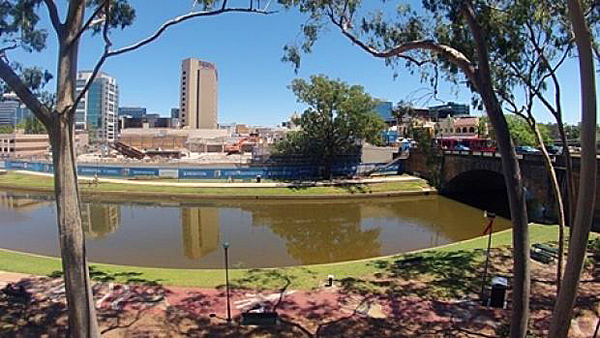 The view of the site of the future Powerhouse Museum and Meriton’s Altitude residential tower from across the Parramatta River. Photo: City of Parramatta.

Why does the state government hate the Powerhouse Museum? Why is it so set upon spending millions, possibly billions, of dollars better used elsewhere (on addressing homelessness for instance) on a senseless relocation of a much-loved and unique institution from its current iconic site?

Why is it willing to spend $240 million to allow the Art Gallery of NSW to expand by encroaching on public land on the Domain while forcing the city’s only science, design and technology museum out of Darling Harbour, the tourist epicentre of Sydney?

Why doesn’t the Powerhouse enjoy the esteem and status bestowed on other cultural institutions such as the Art Gallery or the MCA?

What is it about the Powerhouse that has seen successive state governments determined to emasculate it with ruthless budget cuts, efficiency dividends and nonstop speculation about relocation that no other institution has to wear?

Instead of cherishing a cultural institution whose diverse collection of trains, frocks, engines, jewellery, musical instruments, computers and many other examples of humankind’s ingenuity and creativity ought to make it a national treasure, the place has been subjected to decades of being demeaned and bullied.

Most recently, in February 2015, Mike Baird, then premier, announced he was proposing to relocate the Museum to Parramatta and sell the Powerhouse site to developers, but the efforts to trash this wonderful piece of Sydney history did not start there.

I was privileged to serve for nine years on the museum’s trust including during 2006, when the Carr government tried to force the Australian Museum to amalgamate with the Powerhouse and have both institutions move to an island in Sydney Harbour.

As it always is in Sydney, this was an ill-concealed property grab, with Sydney Grammar apparently wanting to expand into the next-door Australian Museum and the Ultimo site supposed to be made vacant for the highest bidder.

Fortunately this vandalism was stopped after a tough campaign led by Powerhouse Trust president Dr Nicholas Pappas. Now the government is having another go.

It did appear for a short time that Gladys Berejiklian would at least modify her predecessor’s insane decision when she promised to retain the Ultimo site in addition to creating a new museum at Parramatta.

Then last week, apparently afraid that Alan Jones would say more nasty things about her government’s track record of black-flips, the Premier did the political equivalent of a triple somersault and proclaimed that she was back to Baird’s decision.

“Once this relocation is complete, there will be one Powerhouse Museum and it will be in Parramatta,” she said on Monday.

Apparently no one has told her that you can’t move the Powerhouse (it’s a building not a collection) or that there are actually already three “Powerhouses” when you factor in the Sydney Observatory and the Castle Hill Discovery Centre, where 40 per cent of the collection is housed and which is open to the public. The Premier says an “arts and cultural presence” will remain at Ultimo but since the Museum’s entire collection is supposedly to be moved, no one has any idea what this “presence” might amount to.

This being Sydney, we are probably talking about a train museum in the foyer of a 50-storey tower containing upmarket apartments, hotel and retail. (Yes, those air rights above the museum would be up for grabs).

Gone would be Sydney’s first major powerhouse, built in 1899 to power the city’s tram network, and Ultimo’s already ravaged streetscape would be further homogenised.

Can you imagine London bulldozing the power station that houses the Tate Modern? It’s only in Sydney that such brutal destruction could even be dreamed about. No one outside the government has a good word to say about this mad plan.

Some, like the Museum’s trustees, would go along with the Parramatta move so long as a “substantial presence” was retained in Ultimo, but this compromise is not the answer.

Consultations with residents in Parramatta last week revealed they don’t want an imposed Powerhouse (“keep your train!”) but favour a new museum that tells local stories: Indigenous, convict, migrant. Back in 2000, when Sydney was staging all kinds of fabulous expositions to celebrate hosting the Olympic Games, Bill and Melinda Gates decided to lend their copy of the rare Leonardo da Vinci notebook known as the Codex Leicester to one of these exhibitions.

Being somewhat savvy about the nexus between science, technology, design, art and learning, they did not choose the Art Gallery or the MCA or the Australian Museum. They chose the internationally appreciated Powerhouse Museum as the perfect repository for a 16th century document that encapsulates this nexus.

The government has to understand what a unique and precious institution the people of New South Wales have in the Ultimo Powerhouse and, as so many Sydneysiders and others around the world already do, they have to learn to love it.

And, in order to show that appreciation, invest in it.