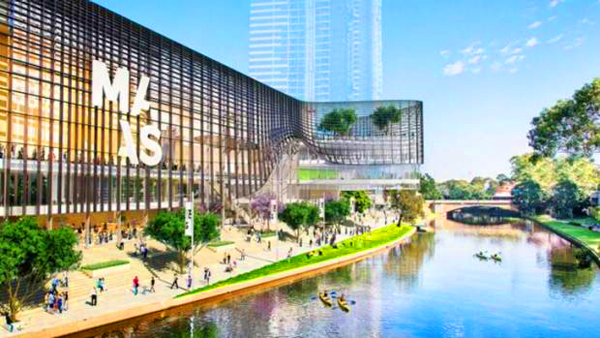 Vision: Construction of the new Powerhouse Museum is expected to start in 2019.

The Powerhouse Museum’s move to the Parramatta River foreshore is under threat: if you believe the cynics.

Parramatta Council administrator Amanda Chadwick, Parramatta MP Geoff Lee and Arts NSW have denied any truth to speculation the move is in doubt.

Rumours have been rife since Gladys Berejiklian was sworn in as the new Premier a week ago. It was followed by claims the state government wanted to “screw” the council over the value of prime land earmarked.

Nine months after the Riverbank site was earmarked, talks between the state government and council continue.

“City of Parramatta has been working, and continues to work closely with the state government on its plans to build the new Museum of Applied Arts and Sciences (MAAS) in Parramatta and has been negotiating towards the sale of council’s land by the river to be the new site of the museum,” Ms Chadwick said.

Dr Lee is yet to sit down with the new Premier but said he had been assured by her the museum relocation will “100 per cent” go ahead.

“Gladys is a person who gives her word,” he said.

“The people out there who are speculating are creating mischief. An analysis by independent assessors found the Riverbank as the best site. I look forward to the museum opening in 2023.”

“The government announced Riverside as its preferred site, so we are focused on that at present,” a spokesman said.

“The final business case for the project is in development and will be considered by government as soon as possible – likely in the first quarter of 2017. Negotiations are expected to take several months. Both Parramatta Council and Property NSW are engaged productively and the discussions to date have been constructive.”