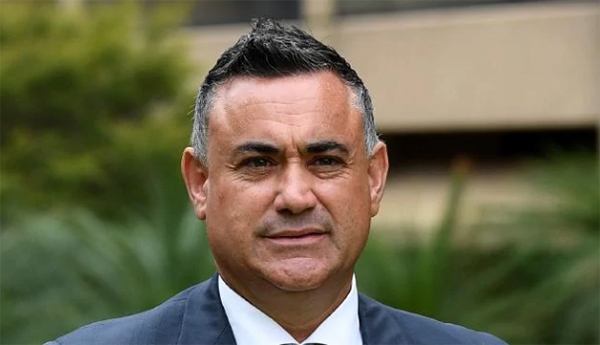 The NSW government has been engulfed in a bitter feud over $2bn in funding for Sydney-centric infrastructure projects, with Premier Gladys Berejiklian’s deputy threatening to go public with allegations of wasteful spending unless plans are scrapped and money diverted to the bush.

In a sign of escalating tensions within the Coalition over competing city and rural priorities, Deputy Premier John Barilaro has begun vigorously campaigning for cabinet colleagues to drop their commitment to the $1.5bn relocation of the Powerhouse Museum from the inner city to western Parramatta, saying the funding needs to be reallocated to struggling regional communities.

Last week, the Nationals leader took the extraordinary step of confiding in Opposition Leader Jodi McKay about his concerns, during a conversation in a Parliament House lift.

That has angered colleagues and placed pressure on Ms Berejiklian to rein in the rogue behaviour.

The Australian has established that Mr Barilaro told Ms McKay he wanted the museum’s relocation to be cancelled so the money could be diverted to more worthy projects in the regions.

Several people were in the lift at the time.

Mr Barilaro declined to answer questions about the matter on Tuesday.

The leader of the NSW Nationals is renowned for his forthright opinions, both in public and private settings, although these opinions are not always consistent with each other.

In February, he repeatedly criticised Environment Minister Matt Kean for pursuing an aggressive reform agenda around carbon emissions, even though privately Mr Barilaro endorsed the proposals in the cabinet room.

Similarly, he has defended the Powerhouse Museum relocation in public, despite privately making no secret of his displeasure.

At a recent meeting of cabinet’s expenditure review committee, Mr Barilaro said he would go public about wasteful spending on city projects.

He named the Sydney Football Stadium redevelopment and the Powerhouse Museum relocation as examples of poor decision-making. The projects are worth $2bn collectively.

“He doesn’t think the bush is getting its fair share,” said a government official familiar with Mr Barilaro’s comments that day.

“It was robust. He was very strongly of the view.”

Last week, Mr Barilaro was queried about the Powerhouse Museum by Ms McKay during question time. He provided a lengthy reply about rural and regional communities in distress — but he stopped short of denouncing the project. Instead, he endorsed it.

“It is a fair question, a question about priorities,” he said. “If I thought that regional and rural NSW was missing out because we did not have the ability to support our regions, then of course I would have concerns.”

Mr Barilaro then spoke privately with Ms McKay in the lift once question time had finished.

Several government sources said they agreed that the Powerhouse Museum project was a thorn in the government’s side. but they were more concerned by Mr Barilaro’s indiscreet conversation with the Labor leader, and why he would provide her with ready ammunition against the government. “If he wants to have an argument about it, take it to cabinet,” one source said.

“He is looking for any excuse to hurt the government so he can look like a hero to the right-wing commentariat.”

A minister said: “I like Barra but his discipline is not good — it’s bad for the government. He has all the fidelity of an alley cat on heat.”

Labor has seized on regional neglect in its messaging to rural voters. Addressing the Country Labor conference in Singleton last weekend, Ms McKay noted that the coastal town of Forster had been repeatedly promised a hospital by the Nationals, when the south coast required a new one.

In Goulburn, a promised upgrade of a hospital remained a “placard on a fence”, the Labor leader said.

“For nine years now, country NSW has looked at Macquarie Street with growing fury and an utter sense of alienation.

“We have a government … that is privatising assets that belong to all of NSW, to fund those questionable projects in Sydney, and to pay for cost blowouts in Sydney.”

The museum relocation was signed off by former NSW premier Mike Baird as an election commitment in 2015, a decision made after the museum submitted a business case requesting funding.

“The current premises were designed for 19th and 20th-century collections and have constrained the museum’s capacity to move with the times,” government documents state.