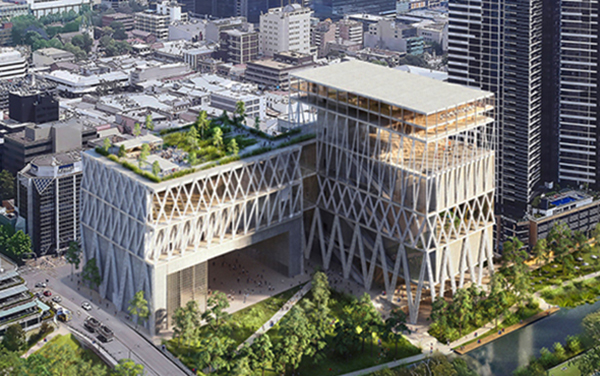 An artist’s impression of the design for the new Powerhouse Museum in Parramatta.

The Powerhouse Museum will need to raise around $75 million from private philanthropists and corporations to meet the multi-million dollar cost of relocating to Parramatta.

The museum’s chief executive Lisa Havilah and its board will take concept plans by winning architects Moreau Kusunoki and Genton to the private sector in the New Year, in the hope of forging partnerships with industry and universities, and generating significant philanthropic support.

The contribution is necessary to offset the overall cost of building, operating and moving the institution to new premises in western Sydney, estimated by the government’s own economic analysis of 2018 to be $1.17 billion.

Taxpayers will need to contribute $645 million towards the relocation project, the differ

“The whole design is completely out of step and no effort has been made to engage with Australian design principles and the culture of western Sydney,” Mr Secord said.

“The Berejiklian government was warned about the floodplain at Parramatta and it responded by putting together a Queensland-style flood and cyclone house deep in the heart of Parramatta.”

But Ms Havilah said the museum would be like no other, the cultural centre of not only Parramatta but western Sydney with seven large-scale presentation spaces, and 60 creative residencies and studios that would support scientists, researchers, artists, and school students.

The museum, she said, would redefine what a museum could or should be for its community and was a transformative government investment that “resets and rethinks who has access to culture and where”.

Genton’s founder and director, Steven Toia, said the plan aimed to reconnect the site to country and the city, with its river. “The minimal building footprint will touch the ground lightly and the structure supports a series of hyper platforms, column-free spaces with flexibility and potential.

“These platforms will support an array of simultaneous curatorial experiences and visitors will move through these connected to nature with views over the river and park culminating in a rooftop garden that will grow produce that celebrates all that is western Sydney.”

Asked if the winning architects met budget brief, Mr Harwin said only that the building would be constructed to a set “budget envelope”.

Mr Harwin disclosed that one shortlisted architectural team did try to keep two historic properties at the Parramatta site – Willow Grove and St George Terrace – but it had been judged too expensive. They are now set for demolition. 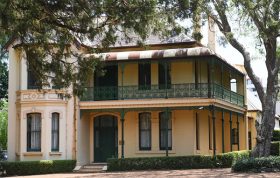 Willow Grove is one of two heritage properties that will be bulldozed to make way for the new museum.

“That was the assessment of the jury so they went with what, I think, is a far better design,” he said.

City of Parramatta councillor Donna Davis, who has argued the historic buildings should be preserved, reacted with “grief” when she realised the properties would be bulldozed.

She said the destruction of the Victorian-era structures was a “missed opportunity” and heritage buildings were incorporated with modern architecture around the world with “stunning results”.

“I’m not going to give up yet. This is the winning design but it’s not the final plan.”

Mayor Bob Dwyer was disappointed the properties would go but said the new building was “iconic”.

“It’s a strong design, it’s unique and it’s bold. People will see it and say, that’s in Parramatta.”