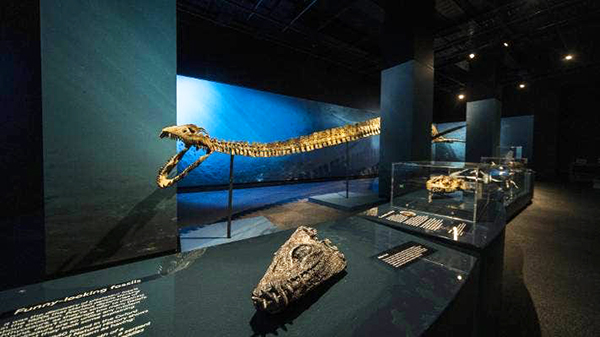 A gigantic replica of a 13-metre-long Elasmosaur, one of the largest plesiosaurs that ever roamed the oceans, headlines the exhibition. View video here.

The common belief that dinosaurs once roamed the world’s oceans is a misconception that keeps marine experts the world over up at night.

Palaeontologist Dr Espen Knutsen is a renowned expert on the reptiles that dominated the oceans at the same time dinosaurs lived on land, and is the senior curator of a new exhibition soon to land at Auckland Museum.

“These sea monsters are actually a different group of animal altogether, and there is nothing that gives marine reptile experts’ grief more than them getting called dinosaurs,” Knutsen laughed.

Given how dinosaurs ruled the land and the monstrous prehistoric reptiles stalked the depths, their genetic makeup couldn’t be more different. In fact, they are about as closely related to each other as we are to dogs, said Knutsen.

Debunking that misconception is one of the main driving forces behind the exhibition, which was curated as a collaborative effort between the Australian National Maritime Museum and Queensland Museum, and spent a year in Sydney and a stint in Brisbane before heading to New Zealand.

Dozens of specimens, comprising real fossils and carefully made casts, make up the collection, all of which date as far back as the Cretacaceous period, between 350 million and 65 million years ago. 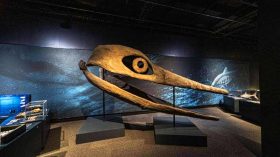 The Kronosaurus jaw is “a really rare material,” said palaeontologist and curator of the exhibition Dr Espen Knutsen. Ricky Wilson/Stuff.

While there are all sorts of captivating relics on display, there is a particular focus on the three major groups of prehistoric ocean predators: Ichthyosaurs – dolphin-like creatures – plesiosaurs, the recognisable long-necked sea monsters, and mosasaurs, which are a close relative of modern day goannas and snakes.

Knutsen said the most striking allure of the collection was being able to witness the similarities between the sealife in the ocean today – “like seals and whales” – to the animals that lived 150 million years ago.

“They have similar lifestyles, which is fascinating, but different ancestral origin.” 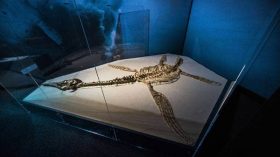 A number of highlights on display include a monstrous jaw of a Kronosaurus, discovered in outback Queensland, and gigantic replicas of a 13-metre long Elasmosaur, one of the largest plesiosaurs that ever roamed the oceans, and a nine-metre long Prognathodon, a large marine lizard belonging to the mosasaur family.

“The Kronosaurus jaw is a really rare material,” said Knutsen. “It comes from an apex predator who was high up in the food chain and so, naturally, there is going to be fewer of those animals.”

That’s why it’s much rarer to find a T-Rex fossil than it is to find a plant-eating triceratops, he adds. 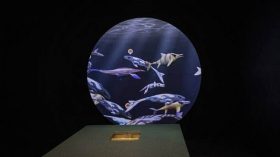 Interactive features make up parts of the exhibit. Ricky Wilson/Stuff.

Equally rare is an animal’s likelihood of becoming a fossil in the first place: Roughly about one percent chance, according to Knutsen.

“Even then, once fossilised it actually has to make its way to the surface through erosion to be able to be stumbled across by someone. It’s pretty unlikely to be found as a fossil.”

In Queensland, much of the material is found by farmers, who while away their days out on the vast stretches of land, and palaeontologists such as Knutsen, who spend their time painstakingly excavating sites and searching for specific fossil-bearing rocks. 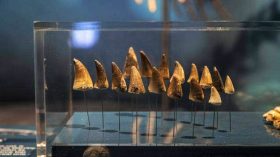 More than 70 specimens are on show, comprising real fossils and carefully made casts. Ricky Wilson/Stuff.

The Southern Hemisphere remains relatively unexplored compared to the rest of the world and thus, beneath New Zealand soil, a vast array of new and unique treasures are still waiting to be discovered.

Knutsen said in the past couple of decades alone there have been about 50 new dinosaur species discovered every year around the world. 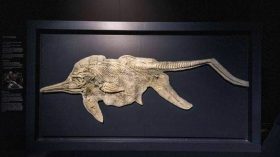 For those who do stumble across a rarity, the exhibition curator recommends taking a photo – and keeping your hands off.

“Just leave it there, especially if it looks as though there is more still left in the ground. Take a photo, make a note of the location and let the local museum know. If you start taking pieces away then you can lose the context, and it can be really hard to find the rest of the skeleton.”

Those who aren’t yet ready to get their hands dirty can find their fossils the old-fashioned way – at Auckland Museum – from next Wednesday.