You are here: Home » Articles filed under: 'News' » Article: 'Prehistory at risk'

Andrew Masterson, ‘Prehistory up for grabs by collectors’, The Age, May 24 2014

Not so long ago, palaeontologist Robin Beck unearthed a fossil that rewrote prehistory.

The 55-million-year-old ankle-bone fragment, found at Tingamarra in south-east Queensland, came from an ancient type of marsupial thought previously never to have lived on the land mass that became Australia. It was so unusual, so unrelated to all other known prehistoric marsupials, that its presence seemed illegitimate. Dr Beck named the new species, in Greek, the ”Old Bastard”.

Right now, perhaps, a self-employed fossil hunter is unearthing a full skeleton of the Old Bastard. With eager cashed-up private collectors in no short supply, the world’s only complete Old Bastard – extraordinary, amazing, game-changing – might never be seen by Dr Beck, his colleagues, or the museum-going Australian public. Indeed, no one other than the seller and the collector may know of its existence.

”My fear is that scientifically very important fossils are out there, but have never been seen by scientists, and perhaps never will, but are destined just to look nice on someone’s coffee table,” Dr Beck said.

Palaeontologists are not the most volatile of mobs, but Dr Beck, from the University of NSW, and colleagues around Australia are voicing concern over what they see as the lack of protection for significant fossil deposits in Australia. The growing commercial trade in fossils, they say, can lead to environmental destruction, and the loss of valuable finds to science.

The concern was prompted by a report in the May issue of the journal GeoHeritage, by another Sydney palaeontologist, Ian Percival. The report revealed vast inconsistencies in fossil protection around Australia.

The export of individual fossils is controlled by federal legislation, but the protection and exploitation of entire fossil sites is covered by a stew of state laws, mostly unenforced. Dr Percival concluded that fossil collecting was effectively unregulated.

While not calling for a ban on genuine amateur fossil-fossicking, the report warned of ”unauthorised raids on sites where significant fossils are stolen and surrounding specimens damaged”.

It also called for strong measures against free-market fossil traders. ”Commercial exploitation of fossil sites must at the very least be strongly regulated or preferably discouraged, as very few (if any) Australian palaeontological localities are sufficiently robust or contain suitably abundant material to withstand extensive mining of specimens.”

Victoria has virtually no legal protection for fossil sites, despite having more than a dozen of them listed by the Australian Heritage Council. A couple of sites, by dint of their location, enjoy some safety under the governing legislation enabling national parks. But Dr Percival’s report notes that fossil protection is not specifically mentioned in any Victorian legislation.

”When publishing on new sites, we use only vague locations, which may be problematic for future researchers,” he said. ”We also try physical means: burying exposures, locking caves, but these only work as deterrents, which anyone with the time could overcome. Also these can act as highlighters – a lock indicates something of value.”

He said Robin Beck’s coffee-table concerns were well justified. ”He’s spot on,” he said. ”I personally have spoken to collectors who have described specimens I would give a limb to study.”

Fossil collecting is a big and occasionally appalling business. In 1996, Australia’s only set of stegosaurus footprints, in Broome, were surreptitiously excavated and, presumably, illegally exported. In 2007, the skull of a tyrannosaurus rex relative was auctioned in the US. Museums were outplayed by two prominent collectors: the actors Nicolas Cage and Leonardo di Caprio. Cage won. The dealer was later charged with illegally removing fossils from Mongolia.

The largest public collection of fossils in Melbourne is housed at Museum Victoria. Dr Erich Fitzgerald, the museum’s senior curator of vertebrate palaeontology, said its specimens were acquired from a range of sources, including commercial traders.

”Throughout its 160-year-history, Museum Victoria has developed its collection of fossils from a variety of sources including targeted fieldwork, donations or gifts, exchanges, and purchases,” he said.

Dr Fitzgerald said the museum had never been outbid by a private collector, Nicolas Cage-style, for a specimen ”because we have never participated in an auction of fossils.”

Back at UNSW, Robin Beck suggested Australian prehistory might be best served through reframing the relationship between scientists and collectors.

”What I am most concerned about is if privately owning fossils becomes ‘fashionable’ or viewed as a ‘good investment’, leading to a big ramping up in price to the extent that certain specimens will be completely out of reach of public institutions,” he said. ”Maybe there could be some kind of public-private partnership. Clive Palmer’s rich and likes dinosaurs, doesn’t he?” 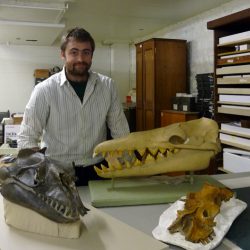 Dr Erich Fitzgerald. Photo: Nicole Alley Source: Museum Victoria
Positions Vacant » View All
» Partnerships Manager – Queensland Museum
» House Museum Coordinator – TMAG
Latest News » View All
Museum of the Year 2021 shortlist for
UK Art Fund £100,000 Prize Read more.
Can US cultural policy better reflect
American values under Biden? Read more.
Victoria’s Creative State Strategy 2025
- stimulus for workers & industries Read more.
Aust Natl Cultural Instns Impact
2019-20 report released (May 2021) Read more.
HTSA @ Ayers House – new opportunities
to fulfill charter & give the past a future Read more.
Top +
Council of Australasian Museum Directors, c/o Ms Daryl Karp, Museum of Australian Democracy at Old Parliament House PO Box 3934 Manuka, Australian Capital Territory 2603 Australia, © CAMD 2021
Copyright: All information and resources provided on this website remain the copyright of the Council of Australasian Museum Directors. Permission is granted for viewing and downloading for personal and not for profit purposes. Those wishing to reproduce any materials for commercial, educational or other uses are requested to contact us.
Disclaimer: The content of this website is provided for information purposes only and is not intended as a substitute for professional advice. No claim is made as to the accuracy or authenticity of the content of the website. The Council of Australasian Museum Directors does not accept any liability to any person for the information or advice (or the use of such information or advice) which is provided on this website. The information on our website is provided on the basis that all persons accessing the site undertake responsibility for assessing the relevance and accuracy of its content. No responsibility is taken for any information or services which may appear on any linked web sites. Hostgator.
.