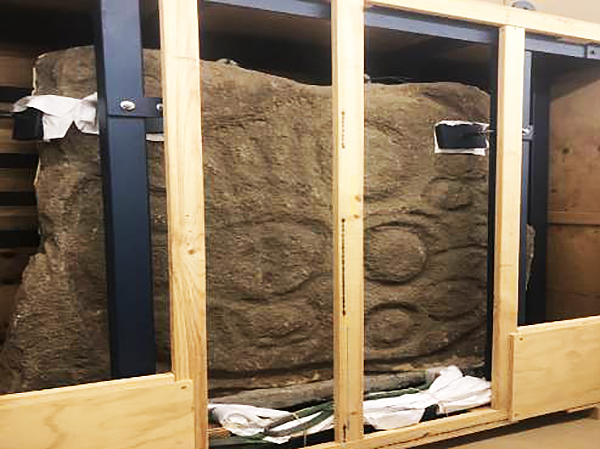 The Preminghana petroglyphs remain in storage at the QVMAG in Launceston and at TMAG in Hobart.

Sacred and historically significant Aboriginal rock carvings will be returned to their original site at Preminghana on Tasmania’s North West, sixty years after they were hacked from a cliff face and transported to a museum.

After months of delay the Aboriginal Affairs minister Roger Jaensch signed the Aboriginal heritage permits which formally allow the return of the Preminghana petroglyphs to Aboriginal land.

He said the government would support the Tasmanian Aboriginal Land Council to ensure the petroglyphs are safely returned, protected and managed for the benefit of all Aboriginal Tasmanians.

Aboriginal Land Council of Tasmania chair Michael Mansell said they would be returned to their exact and original site, and healing could then begin.

“The history of the Aboriginal universe is in those stone carvings. They mark astronomical events, they mark the deaths of great warriors, they mark significant events that took place over thousands of years,” he said.

“Then all of a sudden in the 1960s these white fellas come in and just cut a significant piece of that jigsaw puzzle out and sent it away to white institutions. That not only damages the story but for that whole duration it has traumatised the spiritual and cultural views of Aboriginal people relating to that area.

“This is one way of healing that process, by putting them back, and doing it in a culturally sensitive and respectful manner.”

The petroglyphs, believed to have been carved into the sandstone in the 6th century, were removed in 1962 by the Tasmanian Museum and Art Gallery who hack-sawed a section in an act labelled as “vandalism”.

Mr Jaensch said it is nationally accepted that materials recognised as spiritually and culturally important, or acquired in an unethical way, should be returned to their rightful owners unconditionally.

“On this basis, arrangements for the physical return of the Petroglyphs to their final resting place will be made through agreements between TMAG and QVMAG and the Aboriginal Land Council of Tasmania, as the titleholder of the Preminghana site on behalf of all Aboriginal people in Tasmania.”

Mr Mansell said it was a step in the right direction to help the public recognise the importance and value of historic art forms.

“This is a genuine attempt by government to work with the Aboriginal community in not only restoring the petroglyphs but also symbolically, wanting to get the message out to not only Tasmanians but the world about the value of this art,” he said.

“We are willing to share it, provided it is done culturally sensitively, and we think the government is on board with that.”