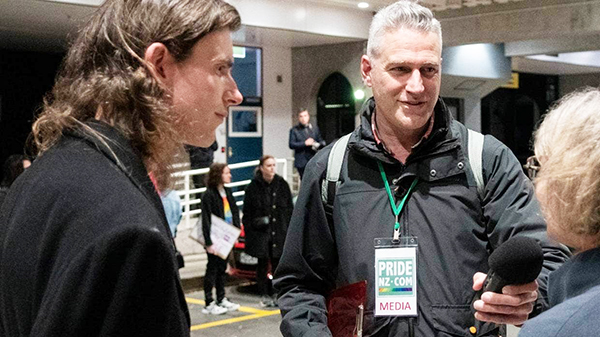 Gareth Watkins from PrideNZ interviewing people at a rally for trans rights earlier this year in Wellington. WEI PHOTOGRAPHY.

Gareth Watkins was shopping with his husband during the recent lockdown when a stranger yelled a homophobic slur while gesturing towards the couple.

“It struck me that people still hate us,” Watkins, Te Papa’s collections data manager, says over Zoom. “That’s why it’s so important for us to document our own lives. Although the action was incredibly shocking, it galvanises our resolve to be present.”

Watkins uses his spare time to curate the PrideNZ website – a historical online repository which explores the voices and opinions of Aotearoa’s rainbow communities through an archive of more than 800 audio recordings of interviews with queer people.

As well as dedicated sections on the HIV/AIDS epidemic, homosexual law reform, marriage equality, Pride and Carmen Rupe, the website hosts an extensive rainbow timeline. It links to more than 18,000 articles published by GayNZ.com over the last two decades.

PrideNZ.com has been selected for digital preservation by the United States’ Library of Congress Web Archive, which preserves what it considers internationally-significant, at-risk digital content. While Watkins was surprised, what struck him most was the recognition from an overseas authority.

Though the site dates back to 2010, Watkins says it’s “notable and perhaps, sadly telling” that the first time any collecting institution approached PrideNZ about archiving its content was from outside Aotearoa. (Watkins has since learned the National Library was – unbeknownst to PrideNZ – web harvesting the site.)

“The question still remains … we’ve been able to collectively capture thousands of voices – voices of people who existed before 2009. Where are they represented in institutional collections?”

Over the last two decades rainbow media has flourished, largely due to queer communities taking responsibility to document their own stories and lives in whatever medium they have available to them. Watkins says that’s a result of cultural institutions including galleries, archives and museums failing to adequately record and share queer experiences. It’s also why he dedicates his own time to PrideNZ.

Things are slowly changing – he sees this at his own workplace at Te Papa. Last year, the museum dedicated a section of its website to rainbow history. Archives New Zealand also has an online area for records dedicated to the rainbow community. But there are still gaps – much of Archives’ records, are from a time when Aotearoa talked about and treated queer people very differently. That’s meant a gap in everyday queer stories. 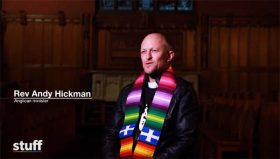 Rhys Walker, who was kicked out of his church for coming out as gay, has now joined with one of the church elders, Andy Hickman, now an Anglican pastor and an advocate of accepting LGBT+ people for who they are, to create a queer safe space.

“Whether they’re still out there, been gathered or gone, it highlights to me that all those voices and experiences were always there, but they’ve been ignored,” Watkins says.

The National Library’s associate chief librarian for research collections Jessica Moran, says it’s been archiving PrideNZ.com since 2011, as part of the Alexander Turnbull Library’s select web archiving programme. New Zealand Legal Deposit legislation allows the library to make copies of websites without needing to seek permission, so since 2006 it has been building a web archive collection.

“It’s one of the many community groups that have always been identified as a high-priority selection area for the web archivists in terms of a desire to develop a born digital web archive collection that reflects the ethnic and cultural diversity of Aotearoa,” Moran says. “We recognise the value of the PrideNZ collection to the queer community and its significance as part of New Zealand history.”

The National Library also has a guide dedicated to queer history and communities on its website, which features how tirelessly its members advocate for positive change, Moran says. The guide includes photographs and newspapers from the mid-19th century, to a wider array of more modern resources. Much of the content can be found in the Lesbian and Gay Archives of New Zealand (LAGANZ), held in the Alexander Turnbull Library. 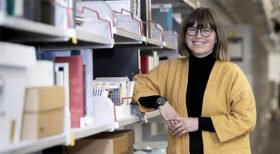 LAGANZ’s collection is owned and managed by a community trust. Roger Swanson, who helps run the trust, knows the struggle of preserving queer histories. It was forced to re-home itself in the Turnbull Library after a hate-fuelled arson attack on its previous Wellington premises saw much of its ephemera burned.

The cultural sector is experiencing similar reckonings with indigenous and other minority communities. Funding remains a major issue and explains some of the collection gap – an archive is something to be sustained in perpetuity, needing resources to go on forever. Keeping material alive is also relatively hard work – think hours of transcribing audio recordings – and costly.

Watkins would love to see increased partnerships between the PrideNZ site and larger institutions to enable shared content, and schools and universities for the development of educational resources.

Part of the site’s mission is encouraging rainbow Kiwis to document their own lives, creating a pathway for future generations to hear who queer people were, how they spoke and what their dreams and aspirations were. 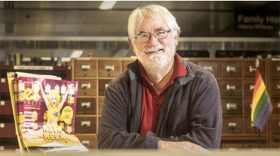 KEVIN STENT/STUFF
Roger Swanson, the trust secretary of the Lesbian and Gay Archives of New Zealand, pictured this year in the Alexander Turnbull Library–the archives’ home.

Its archives include news stories, interviews, opinion pieces and substantial photography and document its evolving communities and their diverse perspectives as they gain greater rights and mainstream acceptance, Hall says. “We have seen a major increase in demand for both our monthly print magazine, and significant upward trend in unique visitors to our website.”

While most readers now feel confident picking up a copy compared to 30 years ago, Hall remembers when it was only available at rainbow venues or paid for in newsagents. As time went on it could be found in Ponsonby cafes, K Rd and Cuba St. Now it’s freely distributed in Countdown supermarkets.

Readership has also diversified, with straight allies alongside readers from its beginnings. Its back catalogue is kept in the national Archives, and has been featured in exhibitions at Auckland Museum and the National Library. 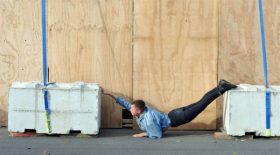 ‘Days Since and Again (So Soon)’, 2015, by Jo Bragg, is on display at the NZ Portrait Gallery. SUPPLIED.

Wellington’s NZ Portrait Gallery Te Pūkenga Whakaata gallery director Brian Wood says the stories of gender-diverse individuals in particular “have not always been prominent” at national cultural institutions. However, he says the gallery has always pushed the boundaries of what portraiture could be.

“By using a model of engaging with guest curators with oversight from the director we are able to engage with and embrace curators at all career stages and from multiple perspectives which brings diversity to the gallery and also new audiences and connections.”

In 2019 it exhibited Poutokomanawa: The Carmen Rupe Generation which showed portraits and stories of transgender women of Rupe’s generation. Now Māori artist and teacher Gina Matchitt has curated an exhibition, Autonomous Bodies.

Matchitt looked to other collections – Te Papa, Wellington City Council, private – to borrow pieces for the exhibition. “It’s about all those ideas – how women have been represented in art [history], but now how women, transgender and non-binary people can represent themselves.”

Jo Bragg, a non-binary artist whose work is part of the exhibition, has previously made art which explores the concept of queer visibility, and how queer histories are often hidden or generational. Bragg created an archive of themselves, then deleted much of the content in a reference to those fleeting moments.

“How many people get to pick archives? Predominantly, they’re selected by white men. … This isn’t beginning the conversation by any means, but it’s continuing it.” 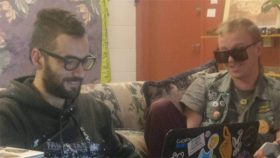 Meanwhile, Adam Rohe, a trained actor, clown and theatre director who came out as transgender in his last year of acting school, has been working with filmmaker Ben Sarten, documenting his life and transition over the past six years. The pair is collaborating with director Neenah Dekkers-Reihana and Wellington’s BATS Theatre to bring the film to the stage in Man Lessons.

Rohe began the projects after seeing the abundance of cis-normative narratives, and trans actors only being cast for stereotypical roles. The works follow Rohe as he navigates surgeries, psychosis, dysphoria, mental health, doctor’s appointments and day-to-day life and personal relationships.

“Hopefully watching someone else go through that helps people find permission with themselves.”

Alesha Ahdar (Ngāti Maniapoto, Te Arawa, Tapuika and Sāmoa) is a takatāpui creative based in Wellington who wrote and directed the short film He Takatāpui Ahau, which explores the role of gender in marae. Eighty per cent of the film’s cast and crew identified as Māori and takatāpui or LGBTQIA+, but the film was also made with a fourth cinema indigenous approach, which attempts to make a space that honours wairua and tikanga. The short film’s story follows a non-binary person as they decide to go back to their tūrangawaewae, despite uncertainty they’ll be accepted for who they are. 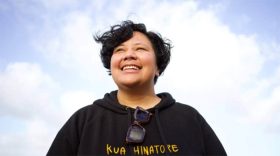 Alesha Ahdar recently wrote and directed a short film which explores the role of gender in marae. SUPPLIED.

Ahdar drew from their own experience navigating gender and cultural identity, sharing many of the same experiences and characteristics as the film’s main character. They say having a by-takatāpui, for-takatāpui film was a relief, in that crew did not have to explain themselves.

Ahdar says rainbow communities are hungry for content that goes beyond the diversity quota – but they don’t think that mindset has yet made it upwards to executives in arts and culture. “They’re still in the process of learning there is an audience.” 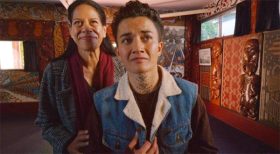 A promotional image of He Takatāpui Ahau. Eighty per cent of the cast and crew identified as Māori and takatāpui or LGTBQIA+. SUPPLIED.