You are here: Home » Articles filed under: 'News' » Article: 'Protecting our Fossil Heritage' 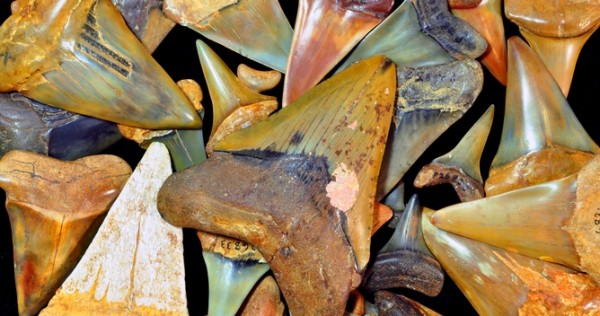 Fossilised shark teeth found at Beaumaris from gigantic extinct killer sharks, Carcharodon hastalis and Carcharocles megalodon. The latter was up to 15 metres in length and preyed on baleen whales. Erich Fitzgerald, Museum Victoria.

John Long, Strategic Professor in Palaeontology, Flinders University, We need to protect the fossil heritage on our doorstep, The Conversation, 27 July 2015

From about the age of eight onwards I regularly collected fossils from around the beach area on the Beaumaris foreshore of Melbourne’s Port Philip Bay.

I still recall the day I sat down on the beach there and put my hand on something sharp. It was a five million year old tiger shark’s tooth, still razor sharp and in mint condition.

The fossils from this site are remarkably diverse and abundant. The 2 km stretch of coast between Table Rock and Mentone Beach is home to Australia’s single richest marine animal fossil site, spanning the last 5 million to 10 million years of Earth’s history.

Today I’m a professional palaeontologist. Between 2004 and 2009 I worked as the Head of Sciences at Museum Victoria and during that time I become more aware of the research on Beaumaris fossils.

Dr Erich Fitzgerald, the senior curator in vertebrate palaeontology at Museum Victoria, and others study the vertebrate fossils that keep emerging from Beaumaris on a surprisingly regular basis. Every discovery tells us something special about ancient Melbourne and about Australia’s changing past environments.

But this highly significant fossil site is under threat from a proposed development by the Beaumaris Motor Yacht Squadron, which wants to build an extensive marina on this area of public land.