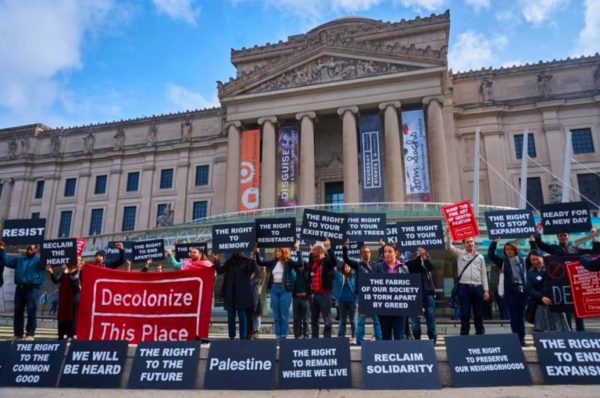 Protesters in front of the Brooklyn Museum (image via @kino___eye).

Close to 100 artists and activists staged a protest at the Brooklyn Museum yesterday afternoon in response to displacement — both in Brooklyn and Palestine. Organized by the Decolonial Cultural Front and Movement to Protect the People, the catalysts for the protests were a photography exhibition focusing Israel/Palestine, called This Place, as well as ongoing conflict with the museum’s director, Anne Pasternak, who many say has downplayed issues raised by artists in the Agitprop! exhibition regarding last fall’s real estate summit at the museum.

The protesters filled the main gallery of This Place on Saturday afternoon at roughly 3:30pm EDT and unfurled a “Decolonize This Place” banner using the branding of the exhibition. The group initiated a mic check and acknowledged that the museum is on Native American land (Lenni Lenape). “We stand with our comrades to amass indigenous resurgence and fight for decolonization,” one woman declared, in front of a banner reading “Decolonize This Place.” They expressed their concerns with the “artwashing” of serious issues in Israel and Palestine, and the role of the museum and its director in these decisions.

“The days in which art and artists are instrumentalized to normalize oppression, displacement, and dispossession of any people are over,” said co-organizer Amin Husain, a member of the Decolonial Cultural Front, during the gallery occupation. “We are watching you, and we will scrutinize your exhibitions and your funding, and we will act when you fail.”

The group drew attention to the funders of the This Place exhibition, which include activist funders and foundations that have donated to the Israeli military (IDF) and other pro-occupation elements in Israeli society, particularly those that preference Jewish identity over those of the country’s other cultural and ethnic groups. As an example, the group points to the Posen Foundation, which funds educational activities in the IDF.