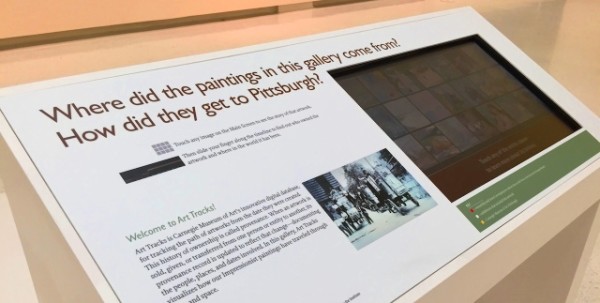 Label text rarely describes the life of a painting before it arrived at a museum, yet there’s a whole narrative of ownership in a painting’s journey from an artist’s studio to a static place on the wall. The Carnegie Museum of Art (CMOA) in Pittsburgh is including this provenance data in a new initiative called Art Tracks. The first phase was recently installed alongside the museum’s Impressionism collection with a digital interface that traces the history of the artworks.

“The touch-based interactive lets visitors ask the question, ‘How did the artwork in this gallery get here?’” Jeffrey Inscho, who heads the Innovation Studio for the four Carnegie Museums, told Hyperallergic. “Visitors are then able to track the artwork’s movement across time and space, watching each work eventually end up on the wall of the museum. It’s our first stab at engaging visitors with Art Tracks, but the future potential is great.”

The collaborative project involved CMOA’s Digital Media Lab, education, and curatorial departments. Louise Lippincott, CMOA curator of fine arts and the main curatorial presence on Art Tracks, said that the project is a tool to answer common visitor questions about authenticity, as well as concerns about responsible acquisitions. She explained to Hyperallergic that a big reason the museum did the Impressionism research was concerns about Nazi provenance issues. “It’s a way for us to demonstrate that we are maintaining the ethical standards of an American museum that has art of this kind,” she said.