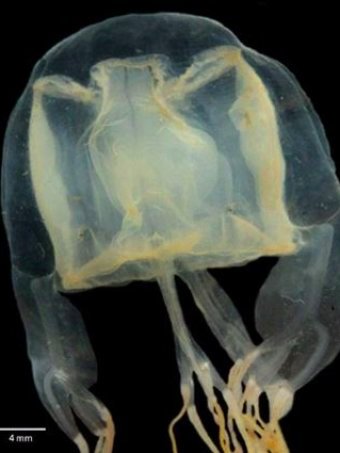 A new species of box jellyfish that was discovered in a Gold Coast canal by a nine-year-old boy has been identified by Queensland scientists.

Chiropsella saxoni, also known as the “pygmy box jellyfish”, is only about two-and-a-half centimetres long.

“I don’t think we have any reason to believe that it’s lethal. We haven’t done the testing to know for sure.

“It’s so small, and the type of sting that it would be able to give would be very minor.

“I mean it probably hurts, but that’s about it.”

But the discovery of the new species has not come without any concerns — the tiny jellyfish may have been found on the Gold Coast, but has since been spotted further north on the Sunshine Coast.

Dr Gershwin warned that could be a sign larger box jellyfish, normally found in northern waters, could also be on the move.

“The ecology of this species appears to be similar to the deadly box jellyfish,” Dr Gershwin said.

“If the pygmy box jellyfish can survive and thrive at the Gold Coast and Sunshine Coast in the canals, I think this really give us probably a good hint that so can the deadly one.