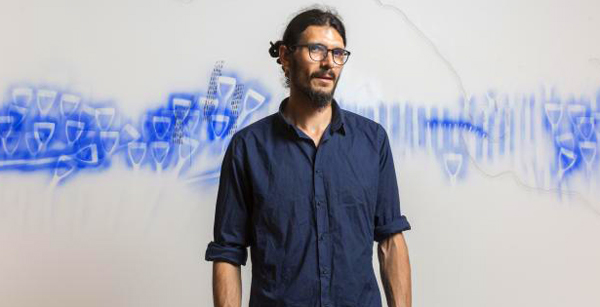 Artist Dale Harding in front of his work: Wall Composition in Receipt’s Blue at the Queensland Gallery of Art. Picture: Glenn Hunt.

A complete reconfiguration of Queensland’s most significant collection of Australian art has been in the back of gallery director Chris Saines’ mind for 17 years, but there may never have been a better time to unveil it than now.

As debate swirls around Australia’s “history wars” and the interpretation of colonial and indigenous history, the Queensland Art Gallery and Gallery of Modern Art’s latest exhibition — a reconfiguration of its Australian collection designed to evoke “fresh narratives” about the nation — will open at a fitting time.

“Art is playing a role in that in a very direct way, and I think many of the works in the exhibition can said to be contributing to that conversation,” says Saines. “I’ve been encouraged and inspired by that … With Stan Grant and Noel Pearson talking about what it is to be Australian and what Australia is today, in many ways this exhibition is a very timely provocation or intervention into the conversation.”

It’s the most ambitious rehang of QAGOMA’s 200-work Australian collection since the gallery opened. The curatorial team has fashioned 120 years of art, from colonial to indigenous work, into a non-linear format, which aims to draw out themes and stories rather than a simple chronological narrative.

“Rather than feeling you have to follow from room to room, you can meander in and across at will. We’ve been able to tell a far more organic story of the collection, rather than a conventional sequential account of Australian art trajectory,” says Saines.

One of the most striking examples is a newly commissioned work by rising indigenous star Dale Harding, whose wall mural Wall Composition in Reckitt’s Blue combines references to the laundry whitener used in the 19th century — widely circulated as a valuable trade commodity — and the cave drawings of indigenous people.

“He is effectively re-engaging and revivifying this idea of wall-based painting in the bush, on the face of a rock,” says Saines.