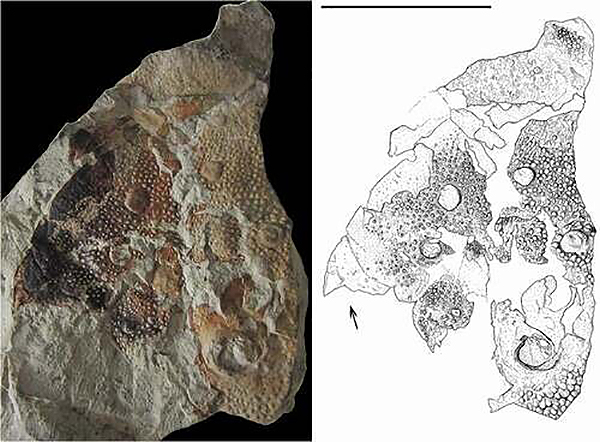 A fossil ‘cold case’ in Queensland Museum’s geosciences collection has led to the description of a new species of sea scorpion (eurypterid), Woodwardopterus freemanorum, which is not only the last known one of its kind in the world, but the first fossil evidence of sea scorpions in Queensland.

The eurypterid was initially brought to the attention of the museum in 2013, having been discovered in the 1990s by Nick Freeman on his family property near Theodore.

At the time, the paleontology team knew it was something special, but weren’t quite sure what group of animals it even belonged to.

Fast forward several years and COVID-19 related closures allowed the team at the museum to take another look at some of the fossils within the collection.

“When the fragmentary specimen came into our collection, it was initially placed in the “Too-Hard Basket’ but the closures provided the opportunity to study and reassess some of our fossil collection and this particular fossil had always intrigued me,” Dr. Rozefelds said.

“From initial research I concluded it had to be an arthropod of some sort and the size, ornamentation and occurrence made affinities with eurypterids likely.”

Sea scorpions are an extinct group of invertebrates belonging to the Chelicerae which includes living groups of animals like scorpions and spiders. Some sea scorpions were massive animals growing to nearly two meters in length. Some groups of sea scorpions also made the transition from marine to freshwater. This new animal from Theodore was a massive monster, probably over a meter in length and had lived in freshwater lakes, or rivers, in the Theodore area.

Given the very few records of these species in existence, Dr. Rozefelds invited a colleague Dr. Markus Poschmann in Germany, an expert on this group of animals, to assist in studying and describing the specimen.

“We needed someone with a broad-based knowledge of this group of animals who could compare the Theodore specimen with other species known from around the world,” Dr. Rozefelds said.

“Using published dates for volcanic sediments preserved in the coal measures the Theodore sea scorpion has been accurately dated as living 252 million years ago and after extensive research this particular fossil turned out to be the last eurypterid known from anywhere in the world. This is just before the end-Permian extinction event. The eurypterids disappeared, along with other groups of animals, at this time.

“This new tantalizing fossil helps fill the gap in our knowledge of this group of animals in Australia, and indeed world-wide.”

This particular sea scorpion would have been among the largest predators in the lakes and rivers of the Theodore area at this time.

Queensland Museum Network CEO Dr. Jim Thompson said this was the type of ‘positive’ you like to associate with COVID-19.

“Our world has changed immensely in the last two years and museums around the world have been impacted by closures and changes related to the pandemic,” Dr. Thompson said.

“But this is a positive-side of the pandemic that has allowed our researchers to reconnect with our collection in new ways and in this case has led to the discovery of a new species.

“We especially thank property owner in Theodore Mr Freeman for making this specimen available for study.”

Queensland Museum artist and preparator, Alison Douglas, has also created a reconstruction of the animal using information from this specimen and from comparative studies of other related sea scorpions.

The new species was recently published in the journal Historical Biology.

See also: The last eurypterid – a southern high-latitude record of sweep-feeding sea scorpion from Australia constrains the timing of their extinction