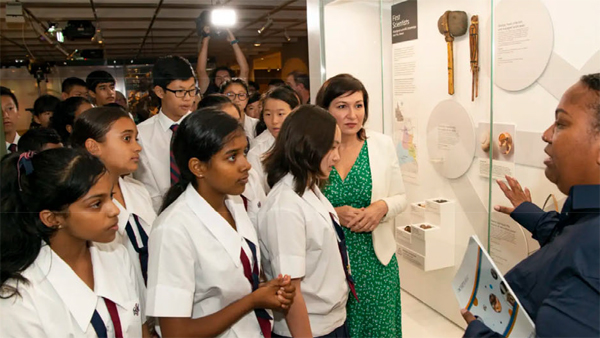 Students will learn how Indigenous people detoxified poisonous Cycad seeds to use as a food source when the Queensland Museum Discovery Centre re-opens on Saturday.

The museum’s exhibition space was temporarily closed for about seven months during a $3.25 million state government-funded refurbishment.

“Seeds were placed in the Jawun, which was then placed in a stream,” she said.

“The water running through the bag initiated a chemical process, breaking the bonds that tie the toxin and carbohydrate together, leaving behind the edible starch.

“This neutralised the seeds’ neurotoxic effects, which include vomiting and nausea.”

Ms Miller said she hoped the collection would assist CSIRO teachers with their school curriculum and shine a light onto Indigenous science.

“People are used to seeing cases about Aboriginal people using spears, arrows and boomerangs so I wanted to change that up and looking at it in the context of this as being science,” she said.

“This really shows that depth as Aboriginal people as the first scientists.”

Ms Miller said the collection explained the detoxification process of Cycad seeds and the scientific aspects involved such as chemistry, biology, geology and knowledge involved.

“It’s not just a beautiful object to look at but they actually had a really significant purpose,” she said.

“Part of that can be teachers talking about land management and how Aboriginal people have been doing that for millions of years.

“It enables teachers to really use this as a tool to get this science into schools.

“I think it’s a really different way of learning about Aboriginal objects and people and showing that depth to the knowledge they had.”

Ms Miller said Aboriginal people had been observing and manipulating their environment, including their food source.

“They took something like the Cycad seed that is very poisonous but plentiful in the rainforest and have figured out a process to detoxify it,” she said.

“If you eat that like it is, you’ll die.

“So they have used their science, knowledge and observation to develop a technique to detoxify this food source and make it into a flower that they could turn into things like bread.”

Ms Miller said she hoped people would appreciate the collection that other museums were beginning to draw inspiration from.

“I’m not sure whether this is the first of its kind but we are getting enquiries about how we’ve put it together,” she said.

“I want the audience to really start questioning what they look at and realise there’s so much knowledge than what you see in front of you.”

Queensland Museum chief executive Jim Thompson said the Discovery Centre was more than just a space within the museum.

“With 11 staff, the Discovery Centre is the hub of Queensland Museum, our team are here to answer visitors’ queries not only in person, but online and over the phone,” Dr Thompson said.

“Since 2008, the team have answered more than 10,000 enquiries per year on a range of topics from archaeology to palaeontology, our unique biodiversity and cultural history, and popular questions about insects, reptiles, arachnids, earth sciences and mammals.”

Children, students and curious adults will be welcomed into the refurbished centre with popular live animals to return in the space, including snakes, spiders, stick insects and giant cockroaches.

Meet the Curator sessions will make a come back and feeding demonstrations will have science buffs in awe with fun facts while getting up close and personal to the animals.

Science Minister Leeanne Enoch said the re-opening of the Discovery Centre would open prior to the museum’s largest exhibition NASA – A Human Adventure.

“With more than 1300 objects on display, including 427 insect species and 600 objects in drawers, there is plenty to discover at the Discovery Centre, including new digital displays,” she said.

“With the re-opening of the popular Discovery Centre, Queensland Museum continues to position Queensland as clearly focused on the future with a quest to discover more about the world around us.”

The Discovery Centre will be open on level four at Queensland Museum on Saturday from 9.30am.