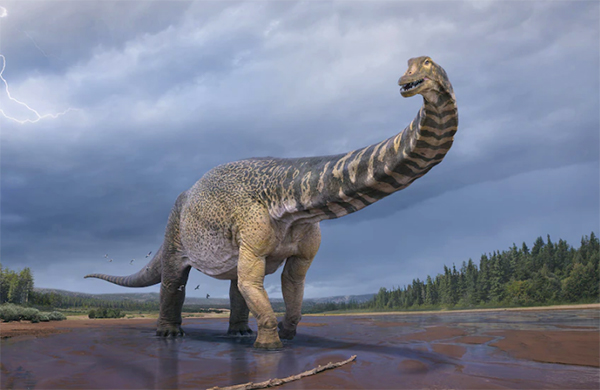 The animal was so large it is considered a titanosaur, which were previously only discovered in South America. (Supplied: Eromanga Natural History Museum).

Robyn Mackenzie and her husband Stuart were mustering cattle on their property near Eromanga in southwest Queensland when they discovered dinosaur bones in 2006.

Now, after 15 years of painstaking excavation, the Eromanga Natural History Museum has officially identified the skeleton as the largest dinosaur ever found in Australia.

Ms Mackenzie, a palaeontologist who runs the Eromanga museum, said those first pieces of bone offered them no sense of the size of the dinosaur they would eventually unearth.

“It wouldn’t have entered our mind that we were about to deal with an animal that was the largest in Australia and one of the largest in the world,” she said. 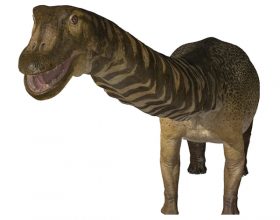 The Mackenzies nicknamed the skeleton Cooper because they found it near Cooper Creek.

Cooper is estimated to have been between 5 and 6.5 metres tall and 25 to 30 metres in length.

Palaeontologists from the Queensland Museum and Eromanga Natural History Museum said the new species of giant sauropod is thought to be in the top 15 of the largest dinosaurs in the world, entering an elite group of titanosaurs previously only discovered in South America. 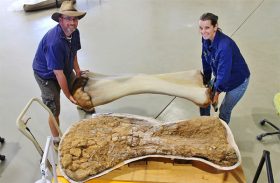 Scott Hocknull and Robyn Mackenzie with Cooper’s fossilised humerus, and a model of what it looked like.(Supplied: Eromanga Natural History Museum).

Queensland Museum vertebrate palaeontologist Dr Scott Hocknull said he was thrilled to finally be able to verify the dinosaur as Australia’s largest after more than a decade of research.

“It’s taken this long because it’s such a painstaking piece of work, you’ve got to take the bones out of the ground, you’ve got to prepare the fossils, and then you’ve got to study them and compare them against all other species of dinosaurs worldwide,” Dr Hocknull said.

“In Australia, it’s certainly the largest animal that’s ever walked the outback.

“This is huge, this is a fantastic beast. Imagine something the size of a basketball court walking around on land.” 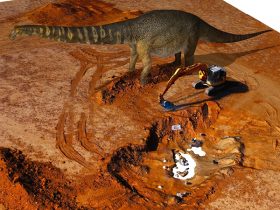 An animation of Cooper standing alongside the dig site and next to the earthmover used to uncover the skeleton. (Supplied: Eromanga Natural History Museum).

Eromanga Natural History Museum has experienced a threefold increase in visits this year, compared to 2019.

Ms Mackenzie expects those numbers to climb when word of Cooper’s discovery starts to spread.

“We hope that it will actually attract people from overseas into Queensland as well, to look at these amazing discoveries that we’re finding in this part of Australia,” she said. 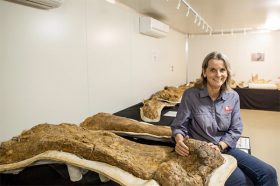 She also hopes the new discovery will put Queensland on the world stage for palaeontology.

“We hope that it will actually attract people from overseas into Queensland as well, to look at these amazing discoveries that we’re finding in this part of Australia.”

“This guy’s just popped up out of the soil and broken all the records.”

‘First of many to come’

Ms Mackenzie said discovering a new dinosaur species was just “the tip of the iceberg”.

Dr Hocknull believes there could be even bigger species yet to be discovered.

“One of the questions that I’m always asking is what ate the plant-eaters?” he said.

“We know that Australotitan — or Cooper — was a plant-eater, so what was marauding around trying to eat these guys? We don’t have any evidence of that just yet.

“That’s exciting because it means that there must be another big story out there. 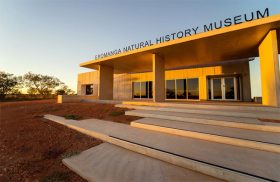 “Think of it like a 95-million-year-old crime scene, where you have all of the evidence, and all of the witnesses are dead.

“There’s bones of them everywhere, spread out, and you’re trying to piece together a puzzle where you don’t have the picture.”

Posted 7 JunJune 2021, updated 8 JunJune 2021
Positions Vacant » View All
» Collections and Database Administrator – QVMAG
» Team Leader Learning & Engagement – QVMAG
Latest News » View All
Wealthy collectors should invest in art schools
not auctions to keep the industry alive Read more.
Paris reopenings – Bibliothèque nationale
Richelieu site (+ Musée Carnavalet) Read more.
Escaped pet parrots threaten NZ birds
– why a ban is the best solution Read more.
Perspectives on Tas tiger’s past & future
via collns & research @ TMAG, MV & AM Read more.
Giant petrel fossil discovered at Taranaki
named by Te Papa researcher & curator Read more.
Top +
Council of Australasian Museum Directors c/o Lynley Crosswell, Museums Victoria, GPO Box 666, Melbourne VIC 3001, © CAMD 2023
Copyright: All information and resources provided on this website remain the copyright of the Council of Australasian Museum Directors. Permission is granted for viewing and downloading for personal and not for profit purposes. Those wishing to reproduce any materials for commercial, educational or other uses are requested to contact us.
Disclaimer: The content of this website is provided for information purposes only and is not intended as a substitute for professional advice. No claim is made as to the accuracy or authenticity of the content of the website. The Council of Australasian Museum Directors does not accept any liability to any person for the information or advice (or the use of such information or advice) which is provided on this website. The information on our website is provided on the basis that all persons accessing the site undertake responsibility for assessing the relevance and accuracy of its content. No responsibility is taken for any information or services which may appear on any linked web sites. Hostgator.
.