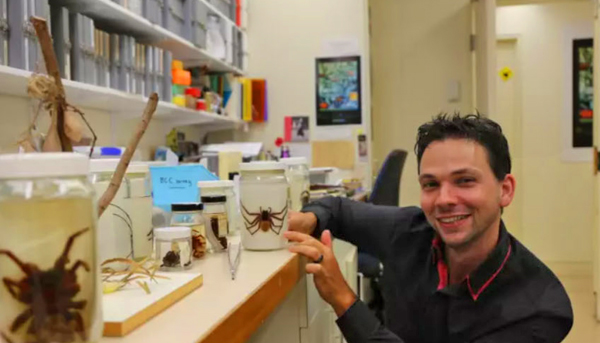 A Queensland spider collection with a history of surviving the destruction of two world wars is in the process of being updated and re-illustrated to help future researchers discover new species.

Doctor Danilo Harms, an international spider expert from Germany’s Centre for Natural History, is working with Brisbane doctor Barbara Baehr to re-image spiders and re-write descriptions to update their records at the Queensland Museum.

The purpose of the project is to create a historical and scientific analysis of the collection to ensure the list of found species was accurate, to make it easier to identify new spiders.

The collection has a fascinating story that began in 1863, when a German woman was sent to Brisbane to collect plants and animals for a private collection, Museum Godeffroy.

In the decades since, the seemingly indestructible collection survived the museum’s closure of its original museum complete destruction of its next home in World War II.

Dr Harms said it was incredible the collection had survived the destruction of both world wars.

“First of all, the Museum Godeffroy, which was a private museum, was abolished in 1885 because the company of the Godeffroys collapsed and then the whole collection was sold,” he said.

Dr Harms said the specimens were sold to various museums across the world but the largest fragment of the collection was kept in a natural history museum owned by the public in Hamburg.

“They kept it safe for 200 years so when Hamburg was hit by the second world war, there was nothing left and the museum was totally destroyed.

“Most of the museum’s collection was lost but the spider collection survived because they hid it in underground train tunnels, secretly hidden away, and there it remained until the 1960s after the World War was over.”

Dr Harms said they were sifting through the collection’s records, which was a 2000-page book published in German and Latin in 1890, featuring 800 species, that took almost 20 years to create.

“When I took on my job at Hamburg as a curator, I knew we had this collection but I wanted to work on it again because after about 160 years, the descriptive standards weren’t very good,” he said.

“In most cases, it is actually not possible to identify the species and we identify spiders on descriptions.”

Dr Harms said the issue of being unable to read certain descriptions or the possibility of a spider being re-entered as a new finding in the collection would make it difficult for Australian researchers to know whether they were discovering a new spider or not.

“We are currently re-interpreting the data to try to figure out where exactly the spiders were collected and under what circumstances. We’re updating the taxonomy,” he said.

Dr Harms said he was amazed at the history of the book, which had survived the odds through the war and had brought experts from two countries together.

“Let me take you back in time to1863, when Brisbane was barely a dot on the map … you had a lady arriving on a ship, which was sent out by a family of traders in Hamburg, Germany,” he said.

“She was sent over to Brisbane to collect animals and plants for a private museum called Museum Godeffroy.”

Dr Harms said the woman, by the name of Amalie Dietnich, travelled to unexplored bush land across Queensland to gather spiders and other animals to send to the museum.

“In that private museum, the specimens were sent out to competent taxonomist so scientists would actually name the species and describe the species,” he said.

“The spiders she collected were sent off to two very famous archaeologists [and] people that work on spiders, and they’d compiled the first major book on Australian spiders.”

Dr Harms said he hoped the research data and book would be accessible for anyone to use.

“That’s roughly 20 per cent of the known spider diversity in Australia and that’s actually quite a lot.

“Currently there are up to 3600 described by the species in Australia, but there are probably 8000 species on the continent, so we still have a lot of things to discover.”

The project is expected to be completed next year.