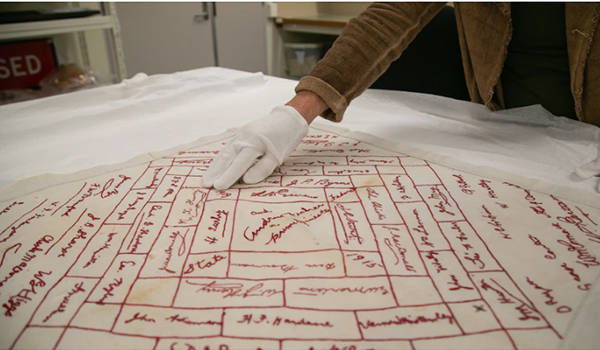 A tea cloth embroidered with the signatures of more than 60 politicians from the early 1900s has prompted a nationwide search for the people and history behind the names.

Queensland Museum curator Judith Hickson hopes the public can help them unearth the stories behind the tea cloth puzzle, especially four signatures on the towel yet to be identified.

“Even the ones we’ve deciphered have been very tricky, it’s been luck and searching through lists of parliamentary names,” she says.

“We have two J Macdonalds, but the only J Macdonald we can currently identify is a JV Macdonald who was a former senator at the time. 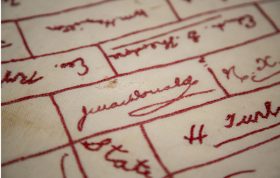 One of the signatures the museum hopes to decipher is that of a J Macdonald.(ABC Radio Brisbane: Jessica Hinchliffe).

“The other we think reads JS Macdonald but we’re not sure and we can’t find anything on this J Macdonald in the parliamentary records, so we don’t know who he is.”

The other mystery signature is Mr John Christie, who could have had one of three occupations.

“The only records we can find on him are those of a journalist, detective or a murderer — he could have been all three,” Ms Hickson says. 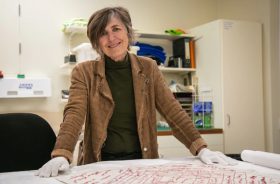 Curator Judith Hickson says the kitchen item would have been a “great point of discussion”.(ABC Radio Brisbane: Jessica Hinchliffe).

“We would really love it if someone could shed some light on that as well.”

With the help of some budding investigators from the public, the museum recently resolved the signatures of WJ Henry and NX Henry to be William James and Nora Xavier Henry.

“Apparently William James was a police sergeant and a member of the Queensland Police Union at the time and there are records of him and his wife Nora being buried in the Toowong Cemetery,” Ms Hickson says.

Story of women behind male politicians

The cloth was embroidered by Beatrice Ferricks in the early 1900s; her husband Myles was a Labor party member at the time.

“It’s been well used, mended, slightly stained and worn from use before being folded and put away in the cupboard — it’s certainly had a place in the home,” Ms Hickson says.

“It’s the size of a card table and I imagine it would have been a great point of discussion for visitors to the Ferricks home.”

The tea cloth was recently donated to the Queensland Museum by Beatrice’s granddaughter Ruth, along with a black lace dress the family believes she wore to political functions as it was her only “good dress”.

“Ruth received the items from her mother Dr Ellen Fraser who became very well known as a medical doctor and passed the items onto her when she passed away,” Ms Hickson says. 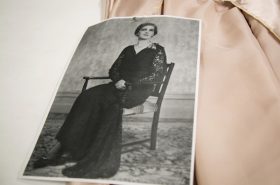 Beatrice Ferricks pictured in her black dress which was also passed down to her granddaughter with the tea cloth.(ABC Radio Brisbane: Jessica Hinchliffe).

“We know very little about Beatrice, but we do think this shows she was politically engaged and supportive of her husband.

“We often know little about the wives of male politicians; they were very much in the background of their public lives, and it was like this for Beatrice.”

Ms Hickson believes the cloth would not have been preserved without the women and wants to pay tribute to them for preserving the story.

“Really it’s a women’s story as the cloth has been passed down by these women and we wouldn’t have this story without them, it’s allowed us to see these stories with fresh eyes,” she says.

“It’s been so interesting going back and looking at the members of the time and what they were known for – hopefully we’ll be able to solve the mystery of the remaining names.”