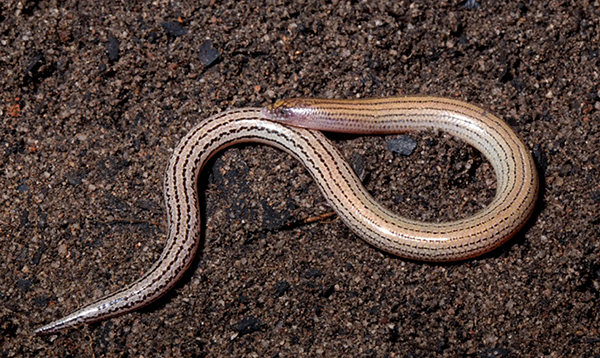 Queensland Museum reptile expert Andrew Amey travelled to the remote north of the state to confirm a new species of skink, but the “discovery” wasn’t news to the traditional owners.

“On that survey we found the first specimen and we showed [our guide] and he said ‘oh, those things, we dig them up all the time when we’re putting in post holes and stuff,” Dr Amey said.

The comment was a reminder that while modern science is still discovering new species tucked away in remote parts of Australia, the traditional owners of the land in many cases have a more complete understanding of the animals which inhabit the area.

The new skink species, one of three discovered as part of the Bush Blitz discovery program, is so prevalent that he suspects it might have given the area its Indigenous name.

“Maybe that is why this country is called Anyara country, because ‘anyara’ is ‘worm country’,” Dr Amey said.

“So when it came time to scientifically describe them and give them a name, we agreed the Olkola people would come up with that name, and they suggested “anyara” which I was really happy with.

“It just makes you understand that even though this is country that western science knows very little about, there are people there who are intimately familiar with every aspect of it.”

Lerista anyara, like many legless skinks of its kind, resembles a small snake but is actually more closely related to blue-tongued lizards and is not venomous.

Despite the fact that it is common in the local area in the remote Olkola National Park on the Kimba Plateau, the skink is not believed to be found anywhere else in the world.

Dr Amey said that meant it was technically an endangered species as soon as it had been “discovered”.

“Calling something ‘endangered’ is a formal process which has to be assessed, which hasn’t happened yet because this is such a new species,” Dr Amey said.

“In the paper we look at the guidelines of what constitutes an endangered species and that applies here.

“It occurs in a very small area and when things occur in small areas they’re vulnerable to catastrophic events such as a bad bushfire or a bad drought, disease, that sort of stuff.

“Because before it was unknown to western science, it could have easily gone extinct and no one would ever know – apart from the Olkula people.”

The plateau is only 100 square kilometres, and the skink’s closest relatives are found around Charters Towers, 500 kilometres to the south.

Queensland Science Minister Leeanne Enoch said Australia was home to one of the oldest continuous cultures in the world, and that First Nations peoples were Australia’s first scientists.

“The Olkola Aboriginal Corporation holds and manages 869,822 hectares of traditional lands, which makes it one of the largest landholders in the Cape York peninsula,” Ms Enoch said.

“The Kimba Plateau is a naturally and culturally significant area and is home to vulnerable plant and animal species, so it’s heartening to see scientists partnering with traditional owners to help preserve and document this amazing flora and fauna.”

Dr Amey said he would love to go back to the region, with the permission of the traditional owners,

“Western Cape York has really been very poorly surveyed, and we really don’t know what’s out there,” he said.

“We have a very long way to go before we fully understand the fauna of Queensland.”

The description of Lerista anyara has been published in the journal Zootaxa.