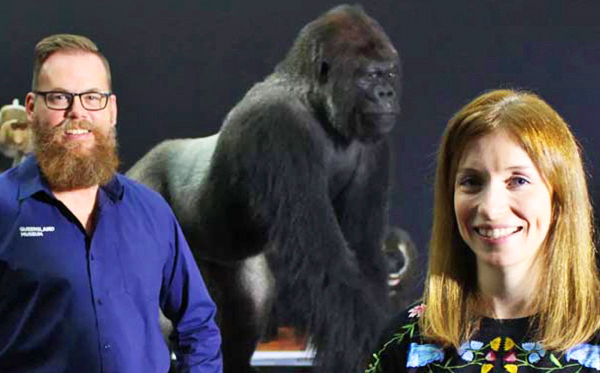 About 60 spectacular taxidermy specimens and articulated skeletons of monkeys, apes, lemurs, lorises and bushbabies can be seen at the exhibition. Photo: Queensland Museum.

Humans can monkey around with taxidermy apes, lemurs and lorises at a travelling exhibition from Scotland coming to the Queensland Museum.

Visitors can get up close and personal with 60 specimens and skeletons at the Monkeys! A Primate Story from Saturday, September 29.

There will be photography, film and interactive activities, including a display where people can fish for termites like a chimpanzee.

The exhibition explores the diversity of primates, their characteristics and how they have evolved over time.

It also investigates the relationship between humans and primates, including the ways in which many species are threatened with extinction through habitat loss and hunting.

“I’ve worked with a lot of national and international exhibitions but none with natural history specimens, primates, so it was really great we were able to work to bring monkeys to the country,” he said.

“That’s what’s really exciting about this show, it is bringing a diverse collection of species we don’t see in Australia but we’re so connected to.

“We share 99 per cent of our DNA with these primates, which is amazing.”

Touring exhibitions manager Alanna Davidson said it took 10 to 20 years for curator and doctor Andrew Kitchener to collect the primates with the hope showcasing them in an exhibition.

“All of the primates passed away in zoos and then came into the National Museum of Scotland’s collection,” she said.

“There was a lot of work and effort in creating the primates and it’s quite a unique opportunity to have such a beautiful collection that we thought it would be great to share it around the world.”

Miss Davidson said visitors would see the primates in their natural stance and learn of their skills through interactive activities.

“The taxidermy has been created to show the animals behaving in a certain way so it really helps tell the story of the exhibition,” she said.

“The mandrill is displaying his teeth to ward off mates, the chimpanzee showing how skilled he is so they’re all telling different stories and posed in that way.”

The exhibition will be on show in Brisbane until January 28.