You are here: Home » Articles filed under: 'News' » Article: 'QM prepares for Spiders: The Exhibition'

QM prepares for Spiders: The Exhibition 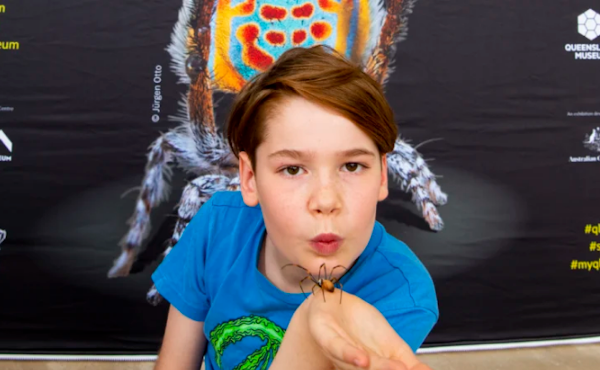 The Queensland Museum is shifting its focus from the stars to something a little more earthbound for its next major exhibition all about spiders.

The new exhibition, titled simply Spiders: The Exhibition, will showcase all things arachnid, with a special focus on Australia’s many fascinating spider species.

The museum has had great success with the NASA: A Human Adventure exhibit, which was timed to coincide with the 50th anniversary of the moon landing and which saw more than 200,000 visitors since opening in March.

“I know for me when I was a child I discovered spiders and I never looked back, so hopefully someone who comes to this exhibition will be similarly inspired, they are just the most fascinating creatures.”

The display will feature a range of interactive displays and demonstrations, along with 200 spider specimens from the museum’s collection and 12 live species, including Sydney Funnel Web, Huntsman and even Australian Tarantulas. 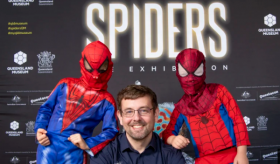 “I think the live animal factor is an exciting element, it’s not traditional to have live animals in a museum exhibit but they really add something and complement the information you’re getting in the rest of the displays,” Dr Rix said.

The exhibition was also a chance to showcase the fact that the museum boasts one of the southern hemisphere’s most active arachnology units, Dr Rix said, with a number of achievements to its credit.

“We’ve named over a thousand Australian spider species which is about a third of all Australia’s spiders,” he said.

“The nice thing about this exhibition is we’ve got some of our own research content in there, and we’ll be showing some of that for the first time.”

One of the live species on display will be one of the newly named species of trapdoor spider, which researchers from the museum recently discovered in south-east Queensland.

Dr Rix is urging everyone from spider lovers to the deeply arachnophobic to visit the exhibition and learn about the fascinating creatures.

“There’s always a lot of interest, whether you love or hate them, and they’re so important to ecosystems,” he said.

“One of the things we’re trying to do is demystify them, they’re very misunderstood creatures, and I think this exhibition will really do that.”

In addition to the live spider and specimen displays, visitors will be able to “challenge” a colourful peacock spider to a dance-off, “hold” a virtual wolf spider in their hand, and use 3D scanning technology to peek into a spider’s insides.

NASA: A Human Adventure is shutting down in just a few weeks, on October 8, while Spiders: The  Exhibition starts spinning its web on December 6.