June 20th, 2019 | Browse other: News. | Tagged with: Queensland Museum, remembering the first explorers on the moon | 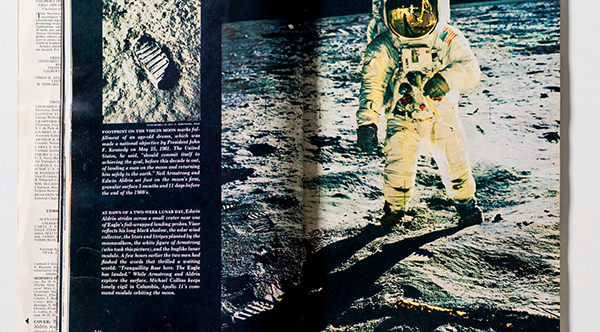 We remember the first explorers on the moon, do you?, Queensland Museum, 13 June 2019

To commemorate the 50th anniversary of the historic Moon Landing, we’re flashing back to 1969. On Monday 21 July at 12.56pm, Eastern Standard Time, Queenslanders were among the estimated 600 million people watching the Apollo 11 Moon landing television broadcast across the world.

The event received extensive coverage in television, radio and print media. These editions of Brisbane’s Courier Mail, published on 21 and 22 July, feature articles about the Apollo 11 mission and crew, along with public and political views on the Moon landing.

The newspapers show the broader impact and excitement around the event, with advertisements for “prices out of this world” at David Jones, and cameras with a lunar connection such as “Minolta lands on the Moon!” The Courier Mail also highlighted a Queensland connection to the Apollo 11 mission, with titanium from the Tin Can Bay area used in the manufacture of the command ship, lunar module lander, and the Saturn V rocket. At that time, a large percentage of titanium used around the world was refined from Australian rutile.

A Letter from Neil Armstrong

The story of the landing on the Moon was not only a global event but a personal one for all who waited and watched. Michelle Cooke was a 16-year-old school girl from Scarborough, Queensland, fascinated by space. When Apollo 11 landed on the Moon, she sent a letter congratulating the astronauts on their massive achievement. To her delight space hero Neil Armstrong replied, thanking her for her best wishes and ensuring these would  be passed on to ‘Mike and Buzz.’ She still treasures this letter to this day, alongside her copy of the National Geographic magazine commemorating this historical event.

Next stop, the Moon

Can you imagine the excitement of a crowd chanting “Go! Go! Go!” while a rocket ship tears up the sky on its way to space? Perhaps, you were actually there amongst the crowd as a young child, or know someone who was? On July 21, according to The Montreal Star, that’s exactly what was happening down on Earth as the population, and traffic stood still. Motor vehicles came to a grinding halt in a 50-mile long traffic jam around the Cape Kennedy Space Centre in Florida,  as people flocked to see history in the making.

These old newspapers were courtesy of Queensland Museum’s Event Manager, Luke Diett’s Mother. Do you still have any Moon landing mementos?

Do you remember the excitement of watching Neil Armstrong’s first step foot on the Moon? Share your Moon landing memories with us along with any images by using the hashtag #SpaceQM and tag @qldmuseum for a chance to be reposted on social media and featured on our blog.

Here are some helpful prompts to jog your memory:

The ultimate Moon landing memory, Neil Armstrong and Buzz Aldrin’s footprints, are probably still etched into the lunar soil thanks to the lack of atmosphere on the Moon.

Make sure to stop by NASA – A Human Adventure to explore the extraordinary collection of more than 250 artefacts from the United States and Soviet Union space programs including items that have actually been to space. Skip the queue and book online here to save time.