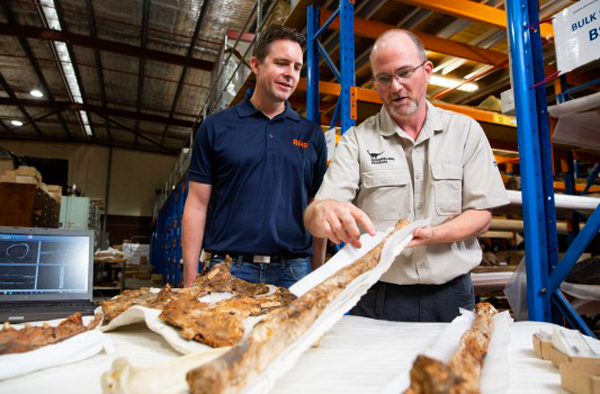 For the past 10 years, scientists at BHP Mitsui Coal’s South Walker Creek Mine in Queensland’s Bowen Basin have been discovering the fossils of megafauna, from giant crocodiles and wombats to six-metre long lizards and 2.5-metre tall kangaroos.

Now, that other big Australian, BHP, has invested $7.6 million in a partnership with Queensland Museum to digitise and 3D-scan its entire collection of 1.2 million objects, with the oversized treasures from South Walker Creek the first set to be shared with the world.

“Soon if a school kid anywhere wants to print out the bones of one of our Pallinnarchus, which are giant crocodiles that roamed Queensland’s freshwater rivers between 30,000 and 50,000 years ago, they will be able to go ahead and do it in their classroom,” Queensland Museum chief palaeontologist Scott Hocknull told The Australian Financial Review.

The first megafauna fossil at the South Walker Creek coal mine was discovered in 2008 by members of the local Barada Barna people, during a cultural heritage inspection for the BHP Mitsui Coal (BMC) joint venture owners.

“We recognised this was extraordinary stuff and called the Museum in straight away,” said BMC’s asset president, James Palmer.

“It’s just amazing to look through what’s come out of there since. They’ve got a tibia of one of these giant kangaroos and it’s got the teeth marks of a Pallinnarchus in it. It’s really something.”

Entrusting a mining company with the digitisation of Queensland Museum’s collection was not as strange as it sounded, according to Mr Hocknull.

“I suppose people expect we’d team up with an IT company to do this. But BHP are a high-level commercial entity that transfers data all over the world, and their 0s and 1s are the same as our 0s and 1s,” he said.

Mr Hocknull hoped the partnership with BHP would show other mining and excavation companies that there was nothing to be feared in working with palaeontologists or archeologists.

“In fact, mine operators benefit from the knowledge that we can give them about their property, and their employees get a kick out of helping to preserve its history.”

BHP shared its expansion plans with Queensland Museum for South Walker Creek, so that its scientists could plan what they had time to systematically excavate, and what would have to be a quicker “salvage job”, Mr Hocknull said.

The work created for a site owner by calling in scientists was usually less than they were expecting, he added.

“There was an overpass in South Brisbane being built a while back and one of the pile drivers disturbed some fossil material about 30 metres underground,” Mr Hocknull said.

“All they had to do was drive the truck with the mud and bones in it to us, instead of the dump.”