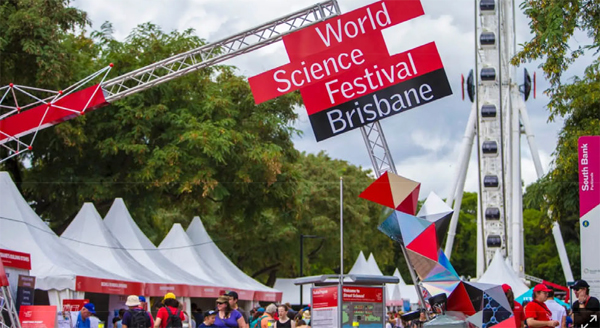 The World Science Festival Brisbane is in its fourth year, with the four-day program to offer a melding of science and art. Credit: Glenn Hunt.

The World Science Festival is set to thrill and fascinate Brisbane for another year, but chief organiser Brian Greene says he’d be happy for the festival not to get any bigger.

Now in its fourth year, the Brisbane festival has become an anticipated event for scientists and science enthusiasts alike.

But Mr Greene, an internationally renowned astrophysicist, says he thinks the festival has reached the right level.

“We love to keep the quality high and the programming sharp and the experiences great,” Mr Greene said.

“So our goal is always to increase those qualities as opposed to just trying to grow the footprint of the festival.”

That footprint itself is relatively small, with the main festival events clustered around Brisbane’s cultural precinct, including the Queensland Museum and the Queensland Performing Arts Complex, with a number of side and affiliated events happening at university campuses.

Mr Greene said that means Brisbane’s festival is a cohesive event on a par with the original World Science Festival, which is held annually in New York.

“To a first approximation they’re not different, and that is a gratifying thing, that the Brisbane event is not a little sister of the ‘major’ festival in New York,” he said.

“They have in fact some of the very same programs, so the program we’re doing on Mars in Brisbane, we’ll be doing the same program two months later in New York City.”

That program, discussing the viability of humanity’s future on Mars, will be moderated by Mr Greene and feature a stellar group of experts, including the first Australian professional astronaut Andy Thomas.

Mr Thomas said he was looking forward to the discussion, which he believes will be one of the great human endeavours of the 21st century.

“I think the Mars mission will be looked on in the way we look upon the voyages of Cook or Columbus or Magellan — it’s one of the great explorations of human engineering,” Mr Thomas said.

However, after attending twice previously, his favourite part of the festival is away from the structured events to the community focused aspect of the event.

“The Street Science events being run over the weekend are always great fun, you get a lot of people coming in because it’s free, and kid friendly,” he said.

“Kids get to play with hands-on science, there’s all sorts of things to inspire their curiosity, and I have to say, inspire the curiosity of their parents.”

Among the many points of interest in this year’s festival are talks and seminars on the ethics of bringing species back from extinction, the massive advances in gene-editing and DNA profiling, and protecting Queensland’s famed Great Barrier Reef into the future.

A big theme of this year’s festival is also combining art with science, with the associated event Curiocity establishing 15 art installations to highlight the intersection of the artistic and scientific worlds.

That theme will then come to a head with Saturday’s event Time and the Creative Cosmos, which will see Mr Greene narrate the entire history of the universe with the aid of a major stage production.

He said the show highlights the fact that science should inspire as well as educate.

“For too many people science touches only their brain, whereas if you can experience science viscerally then it’s a completely different experience.”

The World Science Festival Brisbane runs from Wednesday, March 20, to Sunday, March 24, with details of events and tickets available on the festival website.