You are here: Home » Articles filed under: 'News' » Article: 'QMN finds the space to celebrate'

QMN finds the space to celebrate 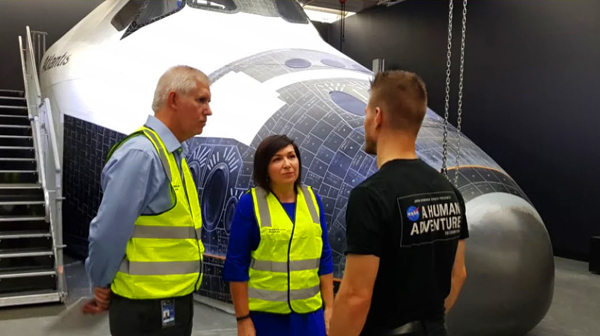 The Queensland Museum is preparing to launch its biggest ever exhibition – so big, they had to take the museum apart to get it in.

The Exhibition, NASA – A Human Adventure, is currently being set up ahead of its opening next month, and it set to be the biggest exhibition ever staged by the museum.

Queensland Museum Network chief executive Jim Thompson said one of the centrepieces of the event is a scale replica of the cockpit and living areas of the space shuttle, which needed some ingenuity to put in place.

“From a logistics perspective it’s been a really interesting exhibition to try to put in the museum, there’s so many big objects,” Dr Thompson said.

“We had to bring a number of them in through the normal way, we’ve got a fairly big goods lift, but we also had to crane objects to the outside and pull the wall off the museum just to get them in.”

The exhibition is timed to coincide with the 50th anniversary of the moon landing this year, and is the latest iteration of an international space exhibition which has been staged in multiple cities throughout the world.

Exhibition coordinator Jukka Nurminen said the event would feature 250 items both big and small, 90 of which were original, with the rest replicas.

“The replicas we need to have because we cannot get the originals from the United States; they are national treasures,” Mr Nurminen said.

“We do have a really large original early-60s Titan I first-stage rocket engine which will be just across from the replica shuttle.”

However for Mr Nurminen the highlight of the exhibit is the collection of space suits, with examples from the early days of manned flight to the Apollo missions.

“Nowhere else in the world can you see that full range of space suits, all the way from Mercury to Apollo,” he said.

“We also have an extremely rare Apollo cutaway suit showing the 14 layers of the suit. I don’t know anywhere in the United States you could see this sort of collection in one place.”

Queensland Science Minister Leeanne Enoch said the exhibition was the first to be staged in the newly refurbished exhibition space in the museum.

“A $3.25 million investment from the Palaszczuk government to see that expansion which means not only is this now the largest exhibition the museum has ever hosted, but it gives us the opportunity to host large events in the future,” Ms Enoch said.

“This exhibition, opening a week before the World Science Festival in Brisbane, is a great opportunity for young and old to come and see the Queensland Museum and get excited about space exploration.”

The exhibition also features a number of items from Skylab, the US space station which crashed in outback Western Australia in the 1970s.

It will run until October this year, and is the only NASA exhibition being held in Australia during this year celebrating the 50th anniversary of the moon landing.