May 5th, 2022 | Browse other: News. | Tagged with: Processionary caterpillar a welcome sign ahead of annual mullet season, Queensland Museum | 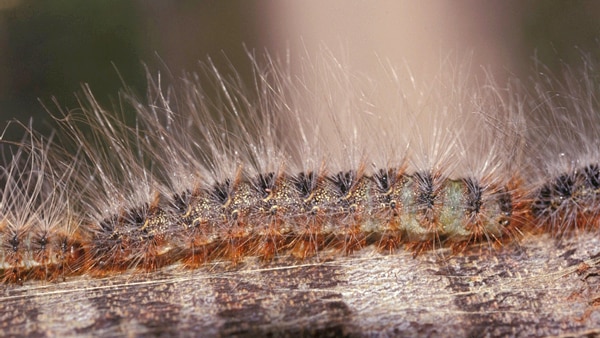 The hairs on processionary caterpillars, or itchy grubs, cause painful dermatitis if touched.(Supplied: Queensland Museum/Bruce Cowell).

While out on a bike ride with her family, Sunshine Coast mum Lisa Sowerby started spotting “furry looking things” shimmying across the concrete.

“I’ve never seen anything like it,” Ms Sowerby says.

“I didn’t realise caterpillars could be so big … I’m from the UK and our caterpillars are tiny compared to those.”

Armies of processionary caterpillars are out in force, causing a flurry of excitement on social media.

“I’ve never seen them in Buderim before this season, but soooo many processions spotted in the last month or so. Quite prehistoric looking.” — Sarah Roberts

“Have been lots of them at Currimundi Lake” — Annie Boyd

The caterpillars have even featured in a season two episode of the children’s show Bluey when writer and creator Joe Brumm needed an obstacle over a walkway and opted for “something Australians are familiar with”.

Processionary caterpillars, or itchy grubs, are dangerous to touch and can be harmful to other animals, but to First Nations people they are “sacred” and are a sign of the annual winter mullet season ahead.

Josh Walker, a Nunagal man of the Quandamooka people, says after a few years of declining numbers, the caterpillars have “bounced back”.

“I think it would be attributed to all of the good rains that we’ve had.”

Mr Walker, from Minjerribah (North Stradbroke Island), says the first indication of the fishing season came in March when parrots flocked to the islands to feed on pollinating flowers.

The more parrots, the more mullet are expected.

Then from April, caterpillars were seen marching in their signature nose-to-tail procession from underneath the wattle tree.

“When they start to move in their long lines, that’s an indication to all of our people here in Moreton Bay that all of the mullet fish are making their way out of the streams and rivers south of here in New South Wales,” Mr Walker says.

He says the mullet move north to Queensland for the purpose of spawning and usually arrive throughout May and June, but hunting does not commence until First Nations people observe a third sign — the white-bellied sea eagle.

“That very sign of the flight of the eagle clearly tells our elders that on that day the mullet fish have arrived.

He says processionary caterpillars are crucial to the interconnectedness of the mullet fish season, which is “our major economy of the bay” and not seeing the hairy insects would cause “great concern and extreme anxiety”.

Where do they come from?

The processionary caterpillars marching across south-east Queensland at the moment are the larvae from female moths laid about five months ago, according to Queensland Museum‘s Chris Burwell.

“The female moth lays a big batch of eggs, the caterpillars hatch out and they all live together in a bag at the base of the tree,” Dr Burwell, a senior curator of insects, says.

“We call them gregarious, and they all leave the plant together.

“At this time of year, they’ve finished growing and they are ready to leave the plant that they’ve been feeding on and find a suitable place to burrow into the ground to spend the cold winter months underground.”

Dr Burwell says they can travel up to 200 metres in a nose-to-tail line from the host tree in search of a suitable place to burrow.

Once underground, the caterpillars remain dormant during winter.

“As it starts to warm up probably around October, November, they’ll pupate, so they’ll turn into a chrysalis under the ground and then sometime later, the adult moths will come out and start flying around November,” he says.

The processionary caterpillar is one type of hairy caterpillar that are dangerous to humans and livestock, causing painful and itchy dermatitis and even premature foals being born.

Dr Burwell says even the moth should be avoided.

“The females have an enormous kind of tuft of white scales on the end of their abdomen … and she lays a whole batch of eggs and then those scales are deciduous, they slough off the end of her abdomen and she uses it to coat the eggs to give it a bit of physical protection from parasites and the weather.

“But some of those scales in her tail are barbed as well, so they can cause dermatitis even if you grab a female of the adult moth.

“We’ve had poor toddlers … and most babies like to put things in their mouth and then they end up with a mouth full of horrible itchy scales.”