To the untrained eye, a few crumbling mounds of concrete and brick are the only clues as to what happened on this nondescript patch of land in central Queensland cane country.

It’s the kind of vacant block one might drive by without a second thought.

But, if you know what to look for, the remnants point to a time of forced labour, mass kidnapping — also known as blackbirding — and incredible cultural resilience.

They tell the story of the Homebush Mill and the South Sea Islanders who lived and worked there, and on surrounding farms.

It’s not a story that’s widely known but a team of archaeologists and Australian South Sea Islanders are setting out to change that.

Standing out from the cane fields in their hi-vis vests, archaeologists from the Queensland Museum and a number of universities travelled to Mackay this month after years of research into the region’s South Sea Islander history.

From the 1860s until 1904, more than 50,000 people were brought to Australia from the Pacific Islands to work as indentured labourers in primary industries.

While some came willingly, the majority was deceived or abducted and they were then subject to harsh conditions, discrimination and paid a pittance. 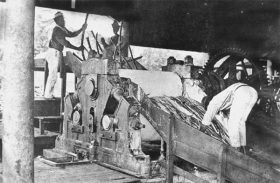 Imelda Miller is an Australian South Sea Islander and curator of Torres Strait Islander and Pacific Indigenous Studies at the Queensland Museum.

“I don’t think there’s much awareness [in the wider community] about what actually happened,” she said.

Ms Miller and other Australian South Sea Islanders are working with the archaeologists to identify culturally significant places, objects and oral histories. 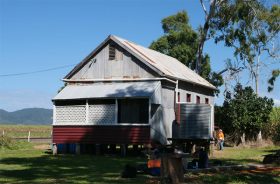 The Homebush Mission Hall was established in 1892, but was rebuilt after the devastating cyclone of 1918. (ABC Tropical North: Angel Parsons).

Their research has led them to the site of an old sugar mill and a mission hall in Homebush, south of Mackay.

The museum’s principle curator of history, industry and technology, Geraldine Mate, said the Homebush Mill site was surveyed and a small area excavated to reveal more about the living arrangements of Islander workers.

“When we got down there, we basically found building rubble, so we weren’t able to discern stories about the past from that,” she said.

It suggested the Islander workforce was not living close to the mill. 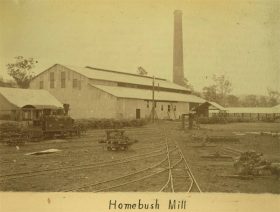 The Homebush Mill operated between the 1880s and 1920s. (Supplied: State Library of Queensland).

“Community members have talked to us about their memories of where people lived,” Dr Mate said.

She said there were different historical narratives about where South Sea Islanders lived.

Some suggested their barracks were close to mills, where it was noisy and unpleasant, while others suggested they were made to live further away, where they were out of sight. 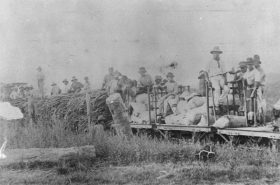 “There’s a whole social element to where people were living. It’s not just about functionality,” Dr Mate said.

“So instead of just saying, ‘South Sea Islanders worked at the Homebush Mill’, we hope to be able to say, ‘They worked [there] but they were living here and here, and they travelled to work this way and did these things as part of everyday living.'” 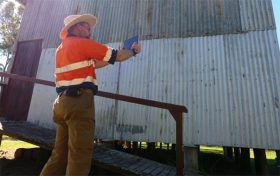 A few kilometres away at the Homebush Mission Hall, archaeologists are scanning the building to digitally preserve the space in 3D images.

The site was a cultural, religious and educational meeting place for the Islander community.

“So we’re looking at different methods of presenting a model of the Mission Hall that may go up online.”

‘Our piece of history pushed to the side’
Mackay man and Australian South Sea Islander Isacc Fatnowna’s ancestors were blackbirded from Malaita in the Solomon Islands.

For him, documenting his family’s experiences is hugely important. 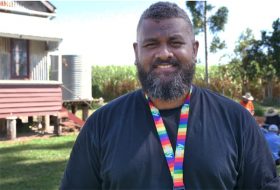 Isacc Fatnowna has been working with the team at the Homebush Mission Hall.(ABC Tropical North: Angel Parsons).

“What excited me is that our history — good and bad — is going to be told,” Mr Fatnowna’s said.

“It’ll have its piece in time and be recognised and told once we’re long gone.

“Blackbirding was a terrible thing but they were still able to live and keep their culture strong.

“South Sea Islander people not having recognition for such a long time through state and federal government, I think, played a part in stories not being told and our piece of history in Australia being pushed to the side.”

Ms Miller said there was a sense of urgency among the community to preserve places of cultural significance and document people’s memories. 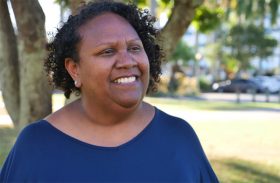 “South Sea Islander history and its physical representation in the landscape is disappearing very quickly, and has disappeared over the last 50–100 years,” she said.

“I work in collections in big cultural institutions and I feel as though the Australian South Sea Islander story needs to be better represented.

“We talk a lot about the early history but I think that needs to evolve into documenting the more recent histories and experiences of the ASSI community over the last 150 years.”