You are here: Home » Articles filed under: 'News' » Article: 'QMN on how groceries made it home'

QMN on how groceries made it home

August 12th, 2021 | Browse other: News. | Tagged with: QMN on how groceries made it home, Queensland Museum Network | 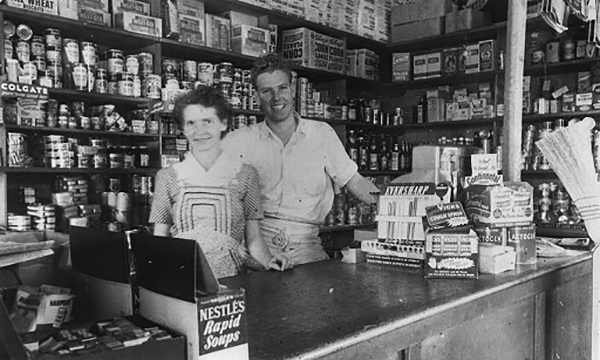 Customers that side, shopkeeper this side… Babe and Ray Melrose behind the counter of their shop, corner of Sandford Road and Dawson Parade Grovely, now Keperra. Courtesy State Library of Queensland.

Grab it on the way home

Many of us think nothing of picking up a few things for dinner on the way home or purchasing a trolley load of groceries at the supermarket on the weekend. Shopping in supermarkets is a part of everyday life in Australia, but it is a fairly recent phenomenon. Large suburban shopping centres only sprang up in the years since car ownership became commonplace in the 1950s. We need the motor car to get our boot load of groceries and parcels home from the supermarket. This begs the question of how people conveyed their groceries home in the era before cars?

Very few townspeople owned a horse-drawn buggy or sulky, so that was rarely an option. Carriages were expensive to buy, and horses needed big yards and cost money to feed. Most shoppers simply walked home, carrying their goods in bags and baskets. Small family-owned ‘corner shops’ were found throughout towns and suburbs. Shops were conveniently located at street intersections for easy access from any direction. However, people can only carry so many items no matter how close the shop. 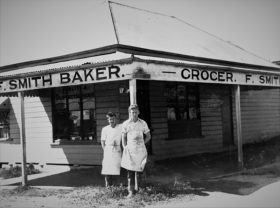 Les and Eddie Smith outside their family’s shop and bakery on the corner of Cardigan Parade and Stratton Terrace, Manly around 1920. Courtesy State Library of Queensland.

Fortunately, most daily needs were home delivered in specialised horse-drawn carts. Trade carts could be seen in every suburban street. Even inner-city suburbs were bordered by small farms, as well as paddocks for all those cart horses.

There were specialist carts for milkmen, bakers, butchers, fruiterers, and fishmongers. The ‘milko’ called twice a day after the cows had been milked and often had eggs as well. The baker came with fresh bread every morning. Perishable foods had to be delivered regularly because there were no refrigerators, but most homes had a small icebox from the early 1900s. The ‘iceman’ also called every morning. 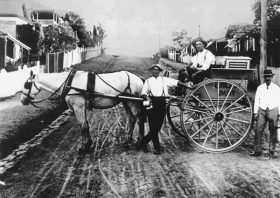 A milk delivery cart at Highgate Hill, Brisbane around 1914. The warm milk was delivered direct from the dairy farm to customers. The box at the rear of the cart held two large milk cans with taps at the bottom. The ladles the young men are holding were one-pint measuring cans. Milk was poured into the customer’s own jug. Courtesy State Library of Queensland. 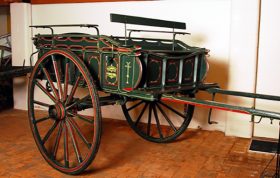 A general-purpose delivery cart commonly used by shopkeepers to deliver groceries, although this cart was used by a Mr. M Smith of Pinkenbah to carry fruit and vegetables. These carts were like the utes of the era carrying all manner of goods. Queensland Museum Network, National Carriage Collection.

Some vendors like the butcher only visited a couple of times a week. Virtually no one had a telephone so the butcher would call in and get orders on the way to his shop in the morning, and deliver the parcels of meat on the way home at night.

All these goods were delivered directly to the kitchen via the back door, known as the ‘tradesman’s entrance’. (And if the horse dropped anything off in the street that was quickly shovelled up as fertilizer for backyard veggie patches.) 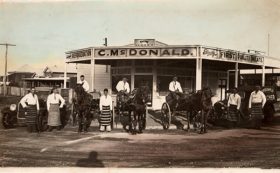 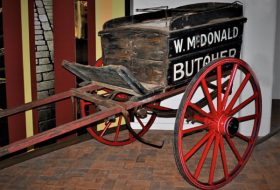 This cart was one of three used by William McDonald’s butcher shop on the corner of Samford Road and Wardell Street Enoggera. Queensland Museum Network, National Carriage Collection.

Tinned goods, tobacco, tea, boot laces, newspapers and a thousand other necessities of life could be bought from the local corner shop. Many shopkeepers also kept a horse and cart to deliver big purchase orders.

Customers in this era never served themselves. The shopkeeper, staff and the shelves of goods were behind a big wooden counter. The customer, almost always a ‘housewife’, told the shop assistant what goods were required and then waited while the items were collected. Sugar and flour were stored in bulk and had to be weighed and poured into paper bags. It was all a little time-consuming. There was often a chair for the customer to sit on while being served. Patiently waiting children may have received a complimentary sweet. (‘lolly’) Money did not necessarily change hands. The price of all the purchases across a week was ‘booked up’ (recorded) for regular customers, and the account ‘settled up’ after payday. 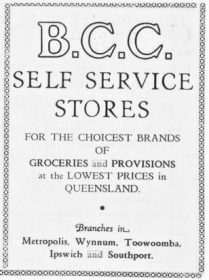 Advertisement from The Portal, yearbook of the Brisbane Boys College, 1936. Courtesy TROVE, National Library of Australia.

A change in retailing in Queensland came with the Brisbane Cash and Carry (BCC) Stores, established in the 1920s by Mr CA (Claude) Fraser on the ‘help yourself principle’. The customer was given access to rows of shelves to select their goods, and then ‘carry’ the purchases to the ‘check out’ point of the store. No longer was there any waiting for sugar or flour to be weighed, all goods were pre-packaged and ready to go. Payment was in cash only on the spot, hence the name ‘cash and carry’. The BCC Self Service stores as they became known needed fewer sales staff, and consequently could offer cheaper goods at ‘rock bottom prices’. Self-service also resulted in faster shopping for the customer. (1)

BCC grew a single shop in Queen Street in 1922 to a chain of 17 stores by 1939. (2) Company director Claude Fraser introduced American innovations such as multiple checkouts, fluorescent lighting, public address systems and glass store frontages. ‘Basket glider’ shopping trolleys appeared in the late 1940s, making it easier to stroll up and down the aisles. The shopping trolley also allowed customers to buy more, and fill their new refrigerators at home. (3) 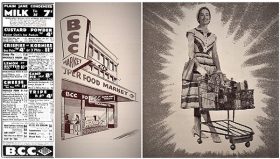 BCC ‘specials’ in the 1950s and advertisements from Queensland Centenary Souvenir Book, 1959.

Suburbs grew rapidly in the post-war boom of the 1950s, and BCC supermarkets were part of every suburban high street. Queensland’s BCC became the largest grocery shopping chain in Australia. (4) Car ownership was also increasing. ‘Going shopping’ for the week’s groceries, and getting them home, had never been easier. Unfortunately, parking was becoming a problem even in the early 1950s. Traffic was choked on main roads near shopping areas as drivers looked for somewhere to park. Retailers also noted that ‘Street parking is bad for trade’, as only a few cars could park outside each store, thereby limiting the number of car-owning customers. Everyone wanted a ‘good park’. No one wanted to walk very far anymore, it was almost old-fashioned. (5)

‘An island of retailing in a lake of parking‘

The ‘Chermside Drive-in Shopping Centre’ opened in 1957 and was the first in Australia designed around the car. Advertisements quite prosaically billed the new shopping centre as ‘An island of retailing in a lake of parking’. There was parking for 700 cars. (6) Chermside was the prototype for shopping centres for the next six decades and through to today. The centre had over 20 shops plus a BCC supermarket and large emporium belonging to Allan and Stark, a long-established ‘up market’ store in Queen Street. Within a couple of years BCC had been absorbed by Woolworths and Allan and Stark by Myer, and their place in retailing history forgotten. 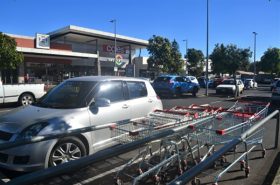 Northpoint Shopping Centre Toowoomba, 2021. It could be any one of hundreds across the country.

The shopping centre with hectares of parking looks to be here for the foreseeable future, but to an extent there is a return to earlier times. Streets in our older inner suburbs are very busy with traffic, particularly in the morning and evening peak hour. There is a temptation to leave the car in the garage and walk to a ‘convenience store’, and maybe grab a coffee on the way. And home deliveries are making a comeback. In the ‘high rise’ inner-city areas of our cities it is becoming impractical for everyone to own a car. The major retail chains have reintroduced delivery vans. Home delivery is vital for our ‘aging population‘. Shopping online also is growing in popularity. A hot meal home delivered is as close as a telephone.

The concept of home delivery has returned to our city and suburban streets, with home delivery from the major supermarkets, online shopping and numerous delivery apps, but unfortunately, I don’t think Dobbyn the horse will make a comeback any time soon. 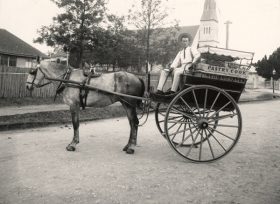